Most Canadians know him as the guy who’s having a great time doing crazy things on his weekly shows.

Some though, aren’t aware that he’s gay and has a lifelong partner, Gerald Lunz.

My husband and I watch him regularly and think that he’s having so much fun and also never being afraid to tackle the most serious political issues.

The “Rick’s Rant” is my favorite part of his show, and also serves to remind me that, here in Canada, we have the freedom to speak out about political issues. (at least as long as Stephen Harper’s conservatives continue to allow it).

Rick is a gay man who’s out living his very interesting life, and his being gay is just “part” of his life. 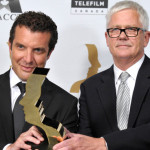