“Even today we are not liberated. We are just beginning.”

Gad Beck was a survivor of the holocaust – and had been helping Jews and gays
escape!

In 1943, Beck and his father were seized by the Nazis.

The Gentile wives protested and convinced the Nazis to release the prisoners. Beck joined an underground movement to help Jews escape to Switzerland. He relied on non-Jewish gays to help hide the Jews. Beck was not deported because he was not considered fully Jewish.

He managed to evade the Nazis and live illegally, underground, in Berlin throughout the duration of World War II. While that in itself was notable, Beck didn’t simply exist in some nocturnal world of hiding. Coming of age as a gay man during the war, he also helped organize a Jewish youth group, free friends from the Gestapo, and maintain a series of romantic relationships

His partner Manfred Lewin was captured by the Nazis, and he tried to save him by impersonating a Hitler youth!  The amazing things that people can do when they have to. 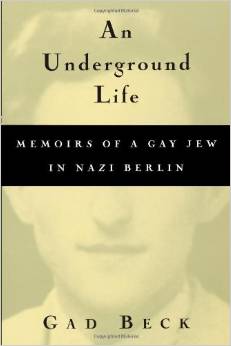 eventually they were sent to Auschwitz, where they were murdered.

In 1945, he was betrayed by a Jewish spy for the Gestapo and sent to a holding camp in Berlin but was set free when the Allies defeated the Nazis.

The German government continued to repress homosexuals. Although gays were liberated from the Nazis, they were subject to incarceration because homosexuality was criminal.

In 2000, Beck’s autobiography, “An Underground Life: Memoirs of a Gay Jew in Nazi Berlin,” was published.

In 2006, the film “The Story of Gad Beck” was released. Beck was featured in “Paragraph 175,” an HBO documentary about gay Holocaust survivors.

Beck is survived by Julius Laufer, his partner of 35 years.