Gay couple nearly killed by man shouting “fa***ts.” But he wasn’t charged with a hate crime. 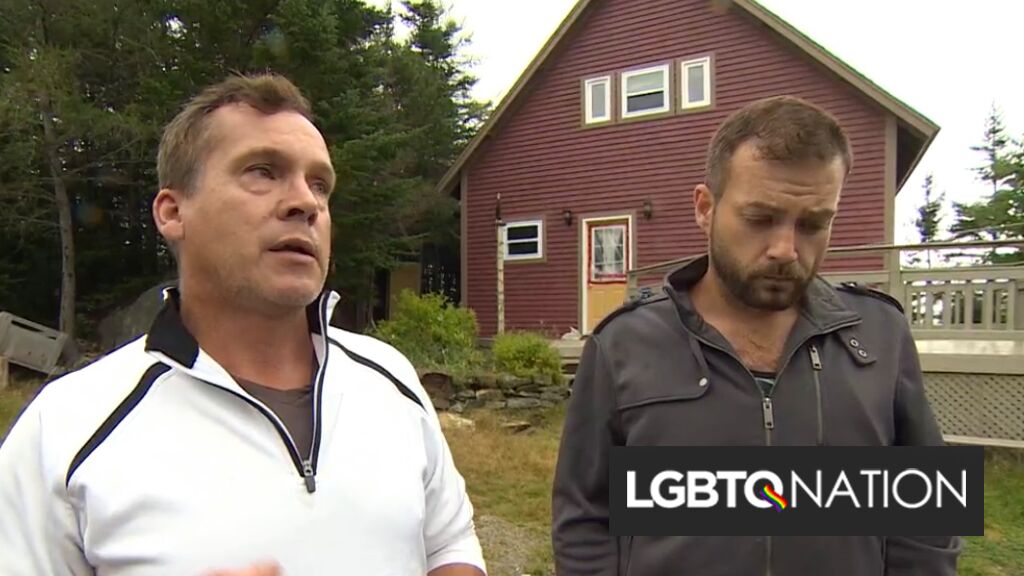 Harvey Mullin Price was convicted this month on seven charges related to attempting to shoot and kill a gay couple. Price is still free on bail, and the couple is still in fear of their lives.

Edison Avery and Chris Neal still don’t know how long Price will be behind bars and won’t know for months. What they do know is that Price was not charged with a hate crime and they still do not feel safe living in the small community on Newfoundland Island, Canada.

Related: Anti-LGBTQ politician who proudly opposed conversion therapy ban is kicked out of his party

“I don’t wish any ill or harm to his family. They used to be my family… but reality is reality and this man shouldn’t be walking the streets and living his life while I’m living in fear every day,” Avery said.

Avery was Price’s brother-in-law, until Avery and his then-wife divorced after he came out.

When Price found out, he vowed to punish Avery and then his new partner, Neal. When he found out that the couple was staying at a cabin built by Avery while he was still married to Price’s sister, Price made clear his intentions.

“He told me straight up that he would make sure that if I ever entered Hatchet Cove again that he was going to kill me,” Avery told CBC News three years ago.

The Hatchet Cove property in the province of Newfoundland and Labrador was part of an ongoing dispute between the former couple, and Price inserted himself into the dispute. Avery and Neal allege that Price referred to them as “faggots” several times and threatened them on more than one occasion.

“We go to the police every time we’re threatened, and yes, they take the statements, they write them down, but there’s never any mention that this is a gay hate crime,” Avery said. He also told police that Price had previously received convictions for animal abuse with his then-girlfriend, Jacqueline in 2013, and Price acquired one prior in 2002.

Authorities still relegated the issue as “more of a civil matter” and allegedly took no action.

“This man has no reason to want me dead,” Avery remarked. “It’s all because of our sexuality more than anything.”

Less than a month after the initial death threat, Avery and Neal were at the Hatchet Cove cabin when Price arrived at the property. Avery went to ask him to leave when he saw he was carrying a barreled shotgun and a round of ammunition.

“He jumped out of the truck and I just sung out, ‘Duck, duck, duck,’ and we ducked and he took two shots at us,” Avery recalled. After, Avery realized that Price couldn’t immediately reload and determined “we couldn’t give him an opportunity to load the gun again,” so they chased him with rocks and he eventually sped off into his vehicle.

Price was arrested that night, but was placed on bail and has remained free since. He’s still out on bail pending his sentencing hearing, scheduled for April 9.

Price received convictions for two counts of making death threats and five counts of weapon offenses, and the minimum time he faces is four years. Avery and Neal still live in fear, but they hope the hate-fueled nature of the crime can earn him a longer sentence than that.

Avery has been diagnosed with post-traumatic stress disorder (PTSD) and hasn’t been able to return to work. He also has developed a seizure disorder which didn’t take place before his near-death encounter with Price.

“We’re just two people trying to live a normal life and it boggles my mind,” Avery said following the conviction, “because in my mind, a lot of this is not just a family thing, but a hate crime.”

CBC News reports that the Canadian Criminal Code’s hate crimes stipulations only relate to vandalism at religious sites, public incitement of hate, and public advocacy of genocide. Assaults due to bigotry are not generally covered.

“When somebody is the victim of a hate crime and they’re part of a community, they wonder, why isn’t this person being charged with a hate crime?” said Evan Balgord, the executive director of the Canadian Anti-Hate Network.

“Because there isn’t one. It doesn’t exist.”