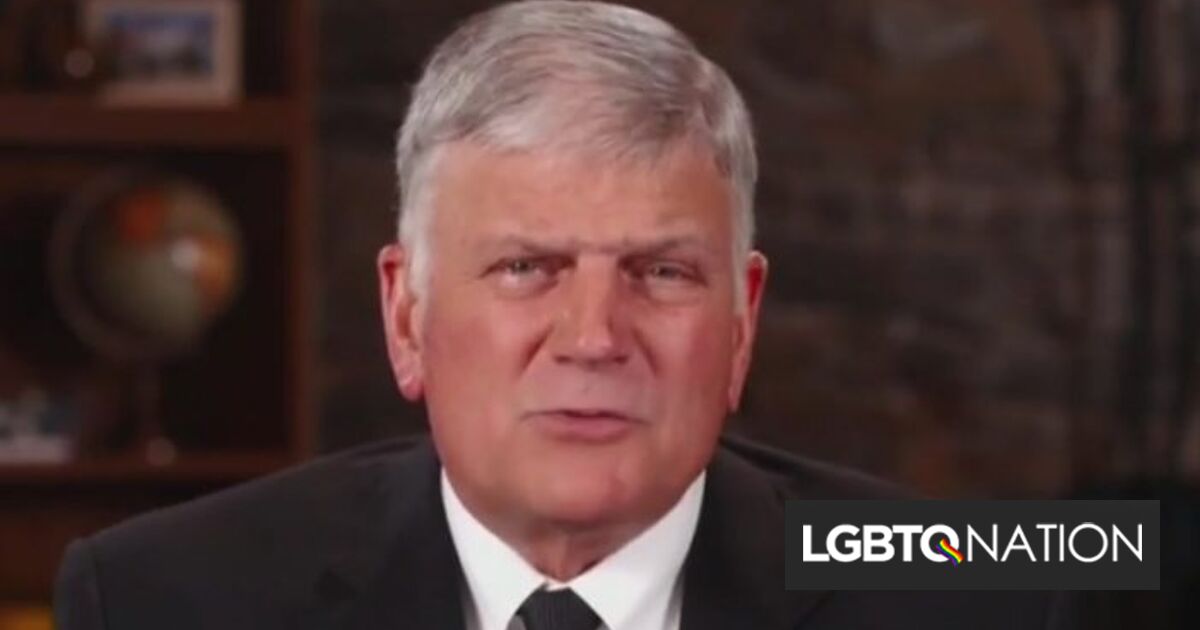 Evangelical leader Franklin Graham is defending a police chief in Florida that is under criticism for speaking at Graham’s recent law enforcement retreat. In his defense, Graham claimed that any claims that he or the Billy Graham Evangelical Association (BGEA), named after his father, is anti-LGBTQ is “just not true.”

Just this month, Graham praised North Carolina Lt. Gov. Mark Robinson (R) — who said LGBTQ people are “filth” — for “having the guts to stand up and tell the truth,” he called for foreign nations to deny people with official gender-neutral markers on their passport, and the BGEA was named in a report as a group materially supporting proposed law further criminalizing LGBTQ people around the world. Yet Graham claims, “We are not anti-anybody. We love people enough to tell them the truth of God’s Word.”

In addition to running the BGEA, Graham is the well-remunerated president/CEO of Samaritan’s Purse, which routinely refuses to serve LGBTQ people. The BGEA has also long supported conversion therapy.

Graham made the remarks in defense of Lawrence Revell, the chief of the Tallahassee Police Department, who is being pushed to resign for speaking at an event at the notoriously anti-LGBTQ organization.

“They are calling for the city to ‘denounce and demote’ him. Can you believe that?” Graham wrote on Facebook. “Chief Revell has been serving with his department for some 30 years. They want to destroy a man’s career after he has invested his life in serving and protecting his community.”

Graham derided any criticism his organization received for working with police officers. “Through our National Law Enforcement Ministry, we hold appreciation dinners and retreats to show officers and their spouses our gratitude for their sacrificial service—and to let them know we are standing with them,” he wrote.

“These events are not funded by taxpayers. They are a gift from the BGEA and from Christians all across the nation who want these men and women to know they are valued and appreciated.”

Graham said “It’s a shame that certain groups are calling for his demotion or removal because he participated in this event and expressed his faith.” He asked his followers to pray for Revell and leave “an encouraging note for him in the comments below.” He concluded by saying that he “would ask those who are speaking against Chief Revell to respect his rights and freedoms—and give him the same consideration that they expect themselves.”

Revell went before the Tallahassee City Commission over the issue and told officials, “How I treat every citizen of this county and how I treat my officers will never ever include any kind of discrimination… Do I do that to discriminate against anyone? No, and I never would. Do I proudly proclaim what I believe? I do and I always will.”

The Tallahassee Democrat reports that Revell took time off to speak at the BGEA’s “Training Center” for evangelical law enforcement, and had his travel, stay, and appearance all paid for by Graham. He did not report receiving the payments prior to attending, and city commissioners questioned whether it was permissible for Revell to receive outside employment while working for the city. However, they have not take any action against him as of yet.

“I do not feel resolved with this issue,” Commissioner Jack Porter said afterwards. “Everywhere we go we don’t stop being commissioners. It is concerning some of the things you said and the context under which it was said.”

Equality Florida, one of the “activist groups” that condemned Revell, did not call for him to resign, but did call his appearance at Graham’s event “deeply disturbing.”

“Chief Revell has every right to observe his faith in a private capacity and that faith may even drive him to be a better chief of police,” public policy director Jon Harris Maurer told the council at a previous meeting. “But there is a line here to be respected. The LBGTQ community has questions and we want to hear that Chief Revell understands that line and abides by it when serving Tallahasseeans, including LGBTQ Tallahasseeans.”

However, a coalition of 10 other organizations, including Planned Parenthood and the Florida Coalition for Transgender Liberation, did call for Revell to be removed.

“We’re not denying that he’s entitled to his beliefs,” Florida Coalition for Transgender Liberation co-founder Lakey Love told the commission, but “When you speak publicly and openly, it’s a problem.”

Lauren Brenzel, the director of organizing for Planned Parenthood of North, South and East Florida, stated, “We cannot have a Police Chief who works with organizations that dehumanize, criminalize and promote the suffering of LGBTQ+ individuals and pretend like that is OK. When we talk about communities feeling afraid of police, this is why.”

Last June, black transgender man Tony McDade was fatally shot by a Tallahassee police officer while allegedly carrying a firearm. Revell and the department misgendered him throughout their investigation and public remarks, and then the department’s police union tried to protect the name of the officer, which was initially denied but then allowed in court. A grand jury declined to issue an indictment against anyone involved.

Graham, meanwhile, emailed the Democrat to once again declare that he is supposedly not anti-LGBTQ. He told them, “we love gay people,” before adding, “anyone who repents can be forgiven.”