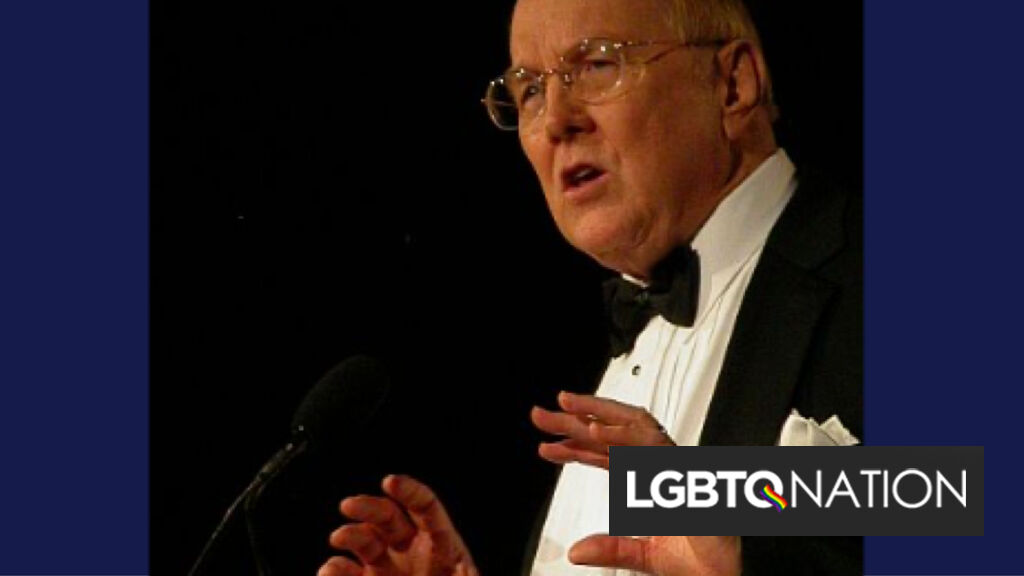 In his latest newsletter, James Dobson — the founder of the hate groups Focus on the Family and the Family Research Council — continued to spout claims that the election remains “unresolved,” and that “if” President-elect Joe Biden takes office, the “radical” left would have “ultimate power.”

What would the supposed “radical left” do with that power? “Bring more LGBT propaganda,” according to Dobson.

In the newsletter, entitled “Where Do We Go From Here?” Dobson claims that Americans is in its most “momentous and dangerous days.”

But it’s not the erratic ending to the Trump administration or the possibility of violence as Joe Biden takes office that has him spooked. Dobson is “alarmed” by the fact that the Supreme Court lent no credence to the election fraud conspiracy in denying to consider the case presented in Texas v. Pennsylvania, et al.

While he admits “I am not a lawyer,” Dobson opines “I join my voice with millions of citizens who are profoundly disappointed and alarmed by the Court’s failure to do its duty.”

He then cites a poll that he admits reflects that believing in election fraud is not in the majority. “A new Quinnipiac University poll says 38 percent of voters believe there was widespread fraud during the November election,” Dobson writes.

“Nevertheless, the issue remains unresolved and will be a blight on the history of this great nation,” he claims.

“The Left has now achieved ultimate power in the White House, in the House of Representatives, and in the Senate,” Dobson writes. “Consequently, as I warned in December, there will be no checks and balances within our system of government. The most radical ideas promoted by President Joe Biden and his majority party will be enacted.

“We can infer from what they have told us that the years ahead will bring more… LGBTQ propaganda,” he writes.

Dobson further continues fearmongering, forewarning us about the coming period of “more socialism… more abortion… less support for the electoral college… more governmental corruption… more ‘cancel culture,’ fewer police officers, more gun control, and less government of the people, by the people and for the people.”

“We can also anticipate quick passage of the horrendous ‘Equality Act’,” he says of the proposed non-discrimination legislation currently in Congress. “You might want to keep track of these items as they occur. This is just the beginning.”

“America and Western civilization will never be the same, because it is not possible to back up on a freeway,” he says.

While the passing of law that would protect LGBTQ people from discrimination may sound like a good thing to most, it is the worst possible event for Dobson, who for years made a career out of promoting anti-LGBTQ rhetoric.

As Dobson admits himself, it’s not likely that a civilized society would renege on protections of basic rights once they’re passed. That apparently threatens to devastate his work.

So Dobson tells his followers, “never in history has it been more important for you to defend your kids and your rights to raise them in the fear and admonition of the Lord.”

“Fight for it with your very lives,” he pleads. “If you are too intimidated or distracted to give priority to your children, the popular culture will take them to hell.”

Dobson is currently a syndicated radio host after previously creating and serving as the chairman of Focus on the Family, which was named after his former radio show. He then went on to create the Family Research Council. Both are anti-LGBTQ hate groups, according to the Southern Poverty Law Center (SPLC).

This is also not Dobson’s first time trying to incite fear around the Equality Act. In May 2019, he wrote in a syndicated column that the proposed law would “represent one of the most egregious assaults on religious liberty ever foisted on the people of this great nation.

“We must not remain silent as our historic liberties are gutted by Democrats and their friends in the LGBT movement. They will enslave us if they prevail,” the 84-year old proclaimed.

In June 2020, Dobson declared the Supreme Court ruling that protected people from discrimination in employment due to gender and sexuality “an affront against God” and “a historical attack against the founding framework that governs our nation.”

Last year, Dobson received between $350,000 and $1 million for his Dobson Family Institute through forgivable loans from the Paycheck Protection Program (PPP), a program administered by the Small Business Administration (SBA) under the Trump administration. The loans were part of coronavirus pandemic relief packages meant for businesses that were struggling. Instead, it ended up in the pockets of the President’s top religious supporters.