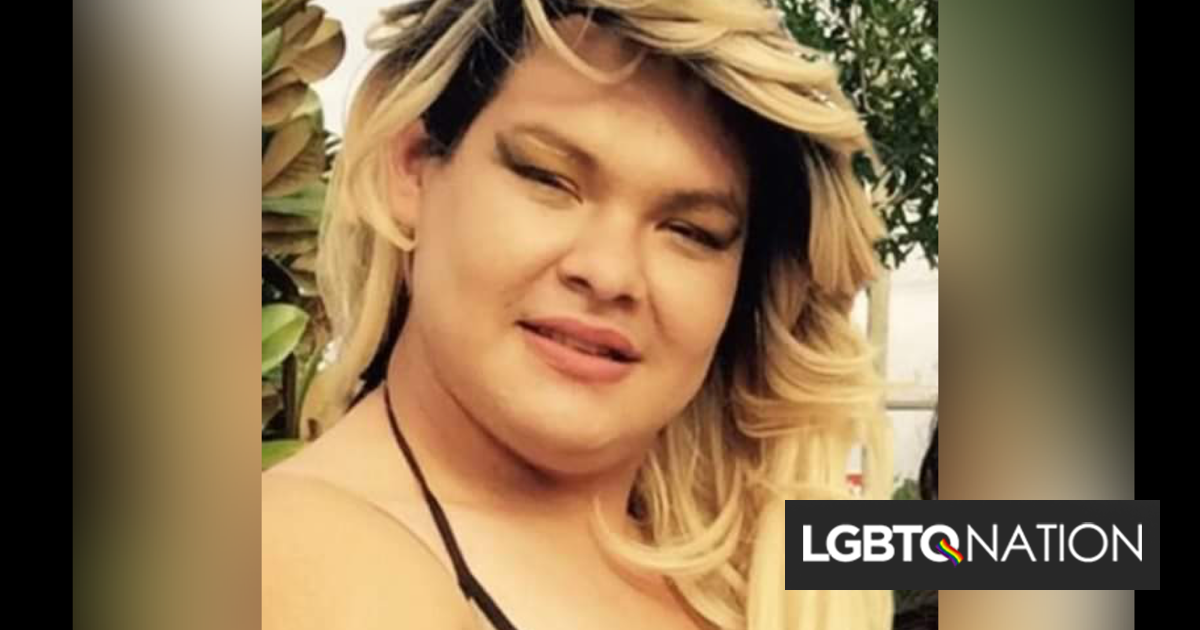 Jenny De Leon, a homeless Latina trans woman, was found dead outside of a house in North Tampa less than two weeks ago. Police have declared her death a homicide, which would make her at least the 46th transgender or gender non-conforming person to fall victim to murder or a violent death in 2021. That adds to the already 45 fatal victims to anti-trans violence acknowledged by the Human Rights Campaign (HRC), the most the LGBTQ advocacy group has ever recorded in a calendar year.

Her death counts as at least the fourth known murder or violent death of a trans person in Florida in 2021, all of whom were trans women of color: In February, Alexus Braxton was murdered, Keri Washington was reported dead near Clearwater in May, and Royal Poetical Starz was shot to death last month in Miami Gardens.

De Leon’s body was found on a suburban road, right next to a busy street, in the Sulphur Springs neighborhood. She was discovered in the early morning hours of Tuesday, November 2.

Equality Florida said that they are “heartbroken” to share the news, which they said they have shared with HRC, according to South Florida Gay News this week. HRC has not yet released a statement acknowledging De Leon’s death, which would bring their count total to at least 46.

PFLAG Tampa posted remarks from Lucas Wehle, who met De Leon while working with the organization, said her death “came way too soon.”

“She came out and transitioned during her time at PFLAG, a couple there took her in and gave her a safe place to live and I was one of many who helped mentor her along the way,” Wehle said. “I do not have words. This year has been the deadliest in record BY A LOT and I cannot stand sitting here feeling helpless while we watch this happen each and every year.”

De Leon was 25 at the time of her death, and Wehle describes her as “a fun spirited and stubborn young woman who never let anything get in her way.” Her sister, Iris, wrote in social media posts that Jenny “was [just] starting her life,” and that she was “the best sibling I could ever ask for.”

Iris has begun a fundraiser on Facebook to pay for Jenny’s funeral expenses. It has raised north of $3,500 as of this article’s writing.

PFLAG Tampa shared the fundraiser and added that they will hold a vigil in honor of Jenny and the other lost lives on November 20, which marks the Transgender Day of Remembrance (TDoR).

We are heartbroken to share news of the murder of Jenny, a 25-year old transgender woman, who was killed in Tampa Bay on November 2nd. Jenny is the 46th known trans or nonbinary person killed this year, making 2021 the deadliest year on record for trans Americans. #SayHerName pic.twitter.com/A3jbWgQDhY

This is a national epidemic – Black & Latinx trans women continue to be disproportionately impacted by these fatal acts of violence. Our hearts are with Jenny’s family, friends, & the community that loved and knew her.

Awful. My heart hurts for Jenny and for our #LGBTQ+ community.

Jenny’s murder investigation is still ongoing & folks who have any information are encouraged to contact Crime Stoppers at 1-800-873-8477 https://t.co/qZnPB3CPZU

Just the day after we mourned the murder of the 45th #trans person in just 2021, we are devastated to learn that the loss of Jenny makes 46. This wave of violence against trans folks MUST end. #ProtectTransLives https://t.co/8jWbxhRyc0

On Friday, White House Press Secretary Jen Psaki condemned violence against trans and gender non-conforming people, and pledged that she would inquire about the issue to others in the Biden administration.

The record for murders and violent deaths as counted by HRC — surpassing last calendar year’s record — was officially set this week with the death of Marquiisha Lawrence.

“Each of these 45 names represents a whole person and a rich life torn from us by senseless violence, driven by bigotry and transphobia and stoked by people who hate and fear transgender people and the richness of their experience,” HRC president Joni Madison said in a statement recognizing the record-setting earlier this week.

Madison points to the normalization of “dehumanizing rhetoric” and the “unprecedented number of bills introduced in state legislatures attacking transgender youth and trans adults.” HRC also determined this calendar year has had the most anti-trans legislation passed or proposed in recorded American history.

Tampa Police are actively seeking tips and encourage anyone with information to to call Tampa Bay Crime Stoppers at 1-800-873-8477. The associated case’s number is 21-463329.