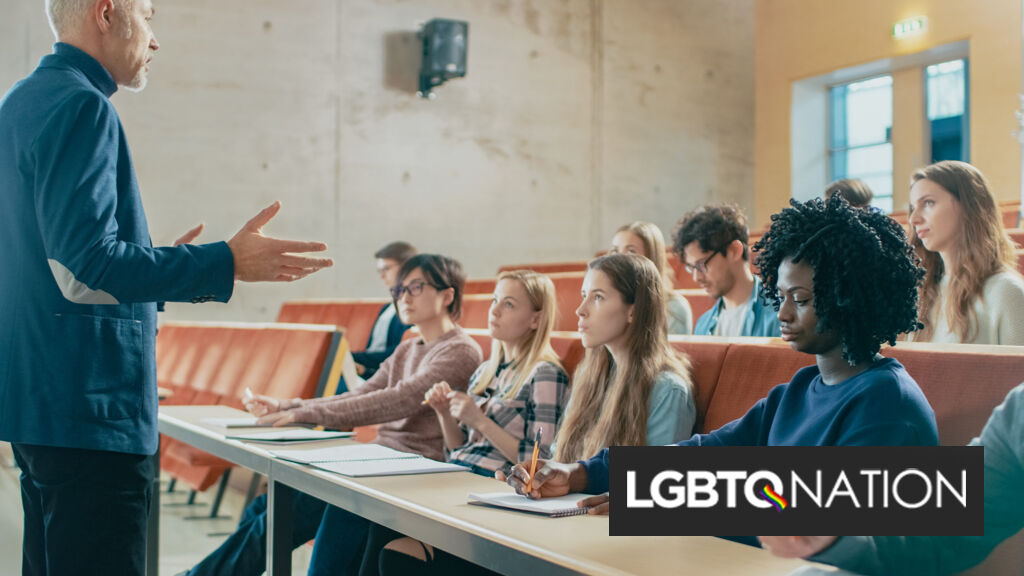 The Sixth Circuit of the United States Court of Appeals issued a ruling on March 26 that reversed a district court’s dismissal of a lawsuit by a professor, who was suing his employer for not allowing him to not use a student’s pronouns.

Nicholas Meriwether, a philosophy professor at Shawnee State University, was reported by a student who accused him of refusing to properly identify her as a woman or with she/her pronouns. The school disciplined him, as they had instituted a policy that instructors were to use a student’s preferred pronouns. Foreseeing that he would continue to disobey the policy, Meriwether — a ” devout Christian” — filed a federal court lawsuit claiming that the policy violated his First Amendment rights.

Related: A trans student was banned from his team’s locker room. Now the school district has to pay $300k.

At the beginning of a philosophy course in the spring semester of 2018, Meriwether addressed the anonymous student during class as a “sir” because “no one… would have assumed that [Jane Doe] was female,” Meriwether’s lawsuit claimed.

Afterwards, the student “approached” Meriwether and “demanded” that Meriwether “refer to [Doe] as a woman” and use “feminine titles and pronouns.” Meriwether claimed that he then “paused before responding,” and determined that “his sincerely held religious beliefs prevented him from communicating messages about gender identity that he believes are false.”

Upon receiving a Title IX complaint, Roberta Milliken, the Acting Dean of the College of Arts and Sciences at Shawnee State, asked Meriwether to eliminate use of sex-based or gendered references from his instruction, but Meriwether claimed that he relies on the Socratic method of teaching.

Milliken accepted a “compromise” that would allow him to refer to the complaining student by her last name. He continued to use pronouns for other students. Two weeks later, the student complained once more and objected to the compromise.

Soon after, according to his own take of events, Meriwether slipped up and “accidentally referred to Doe using” pronouns inconsistent with her identity again. Further, Meriwether sought to state in his syllabus that his use of pronouns “was doing so under compulsion and setting forth his personal and religious beliefs about gender identity.”

This attempt to find “common ground” was denied by Milliken in her interpretation that it violated the school’s policy on gender identity in addition to leading to further Title IX issues. After an investigation, the school’s Title IX office determined that “Meriwether’s disparate treatment [of Doe] ha[d] created a hostile environment” and violated the school’s policy. The school accepted Milliken’s recommendation for a formal warning on Meriwether’s record.

Meriwether was not fired, suspended or removed from any classes. But fearing that he would face such issue in the future, he filed a federal lawsuit against the school. He retained the services of, among others, Joan Bursch, an attorney working for the Alliance Defending Freedom (ADF), which has been designated an anti-LGBTQ hate group by the Southern Poverty Law Center (SPLC).

Meriwether’s lawsuit was initially dismissed by the United States District Court for the Southern District of Ohio in February 2020, which relied on a magistrate’s recommendation to do so. An all-conservative appointed, three-judge panel from the Circuit ruled that the magistrate’s determination, and thus the district court’s, was legally wrong.

“The district court’s conclusions about Meriwether’s… free-speech claims were all premised on the notion that his speech was not protected. Because that premise was legally erroneous, we vacate all of the district court’s free-speech holdings,” the opinion written by U.S. Circuit Judge Amul Thapar, an appointee of President Donald Trump, states. David McKeague, an appointee of George W. Bush, and Joan Larsen, another Trump appointee, also sat on the panel that heard arguments in November 2020.

The Circuit Court ruling, which stated it was made on the assumption that all of Meriwether’s claims are factually accurate, deconstructed the argument of Shawnee State and the student, who legally intervened in the case along with a Sexuality and Gender Acceptance, an organization at the school.

“Simply put, professors at public universities retain First Amendment protections at least when engaged in core academic functions, such as teaching and scholarship,” Thapar determined. The use of pronouns fell into the “academic-freedom exception” secured by the Supreme Court in Garcetti v. Ceballos (2006) in their view. A professor’s misuse — or refusal to use — a student’s pronouns falls into Meriwether’s protected speech because he claims it goes against his religious beliefs.

Meriwether also challenged the school’s rule on the basis that its policy was “unconstitutionally vague as applied to him.” The district court dismissed this claim as well, and based on rulings by the Supreme Court, the Circuit Court panel upheld their decision in that regard.

“When Meriwether asked the university administrators for guidance, they ultimately told him he had to use Doe’s preferred pronouns. And when he didn’t comply, they disciplined him. Since he was clearly on notice that the policy applied to his conduct, he may not challenge it for vagueness,” Thapar’s opinion states.

In a statement after the ruling, the ADF’s Bursch praised the decision, claiming that “this case forced us to defend what used to be a common belief — that nobody should be forced to contradict their core beliefs just to keep their job.” The dispute was returned to the District Court’s jurisdiction and Meriwether can continue seeking further proceedings.