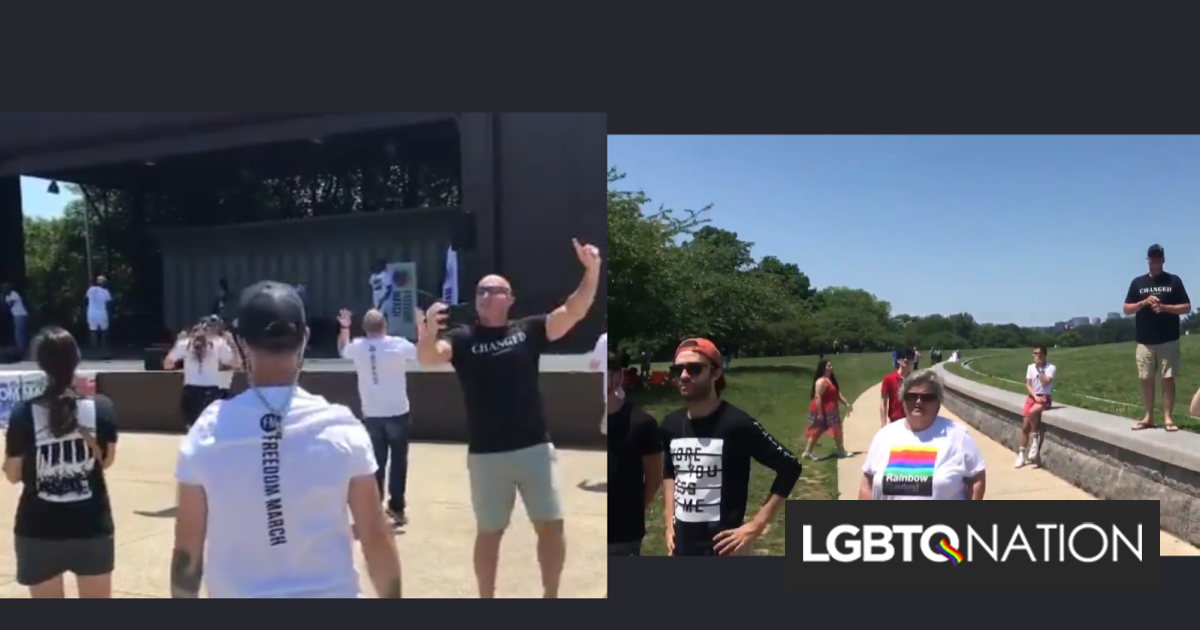 The Changed movement, a group of “ex-gay” advocates that claimed to have left behind their LGBTQ identities, embarked on Washington D.C. this weekend as part of their CHANGED DC “tour.”

One of the main events of the tour was what was called a “freedom march” yesterday to celebrate their ex-gay identities and show support for anti-LGBTQ causes, as they’re lobbying Congress to stop their efforts to pass the Equality Act or other pro-LGBTQ legislation. The “march” turned into a dance party of just members of the group and possibly bewildered onlookers at the Washington Monument.

Related: Milo claims that dogs stopped barking at him as a sign from God once he became “ex-gay”

Today’s event was expected to be a rally with a “diverse group of former LGBTQ individuals in worshipping, sharing our testimonies, and celebrating freedom in Christ publicly on the Mall in Washington!”

From early footage of the event captured by Washington Blade photo editor Michael Patrick Key, the rally mostly featured dancing and singing by Changed members. Others in the shadow of the Washington Monument, some wearing Pride colors, appear to have stopped for the music.

The Changed group consists of men and women who have declared themselves “ex-gay” or “OnceGay.” The “formers,” who are also associated with the organizations Church United, say that they’re the real oppressed minority here. But instead of advancing their interests, they argued against LGBTQ people’s.

They began lobbying Congress this week in opposition to the Equality Act, a landmark LGBTQ non-discrimination legislation. The group also opposes efforts to make so-called conversion therapy illegal, and many believe the psychologically damaging pseudoscientific technique can actually ‘change’ people from gay to straight, as many of them have ‘successfully’ received it.

“CHANGED has come to DC to appeal to Congress to focus on human dignity, not identity politics,” Elizabeth Woning, the group’s co-founder said in an emailed press release announcing their “tour.”

Woning said that they “Are Christians with LGBTQ in our past. Many, like us, have changed. We left LGBTQ because we wanted to.”

After today’s “march,” the “tour” will conclude with a two-day Speak Out training event for other “ex-gay” people at the price of $35, which is “aimed at equipping and activating CHANGED to raise their voices and change culture!”

On the first day, which is tomorrow, Changed will have “friends from strong, conservative advocacy groups to share their wisdom” and ask registered guests to rehearse and share their stories. On the second day, they ask now-“trained” guests to set up meetings with their U.S. Senator’s office and try to convince the politicians to oppose LGBTQ rights by sharing their story — with Changed members present.

While the group claims religious people shouldn’t get “special” protections from the government either, the “ex-gay” lobbyists want a number of their “rights” protected that it claims current pro-LGBTQ legislation will remove. Woning cites freedom of thought and religion as granted by Article 18 of the Universal Declaration of Human Rights, the adopted guidance of the United Nations. (The United Nations has opposed conversion therapy.)

That includes the right to “follow one’s religious convictions away from LGBTQ identity,” the right to “shape one’s own sexual identity without political indoctrination,” and the right to “publicly declare alternative views of LGBTQ experience without being labeled a ‘hate group.’”

In 2019, two significant “ex-gay” leaders came out of the closet. The first is David Matheson, a Latter Day Saints therapist who helped write the instruction handbook for the “ex-gay” program Journey into Manhood. The second, McRae Game, led a well-known conversion ministry in South Carolina for two decades.

The group lobbied Congress in 2019 as well. They also descended upon the nation’s capitol in 2018 with as bad of a turnout, long before the pandemic.

Not many online were receptive to the “ex-gay” movement arriving in Washington.

Lol this is hilarious, what a huge huge turnout at the “ex-gay” Freedom March in DC. Lol seriously, there’s no such thing as “ex-gay”, once a gay always a gay! 🤣😉🏳️‍🌈🙌🏽💃🏼❤️ https://t.co/ZjGVcU2lAr

Hmmm, doesn’t appear to be any “ex-gays”