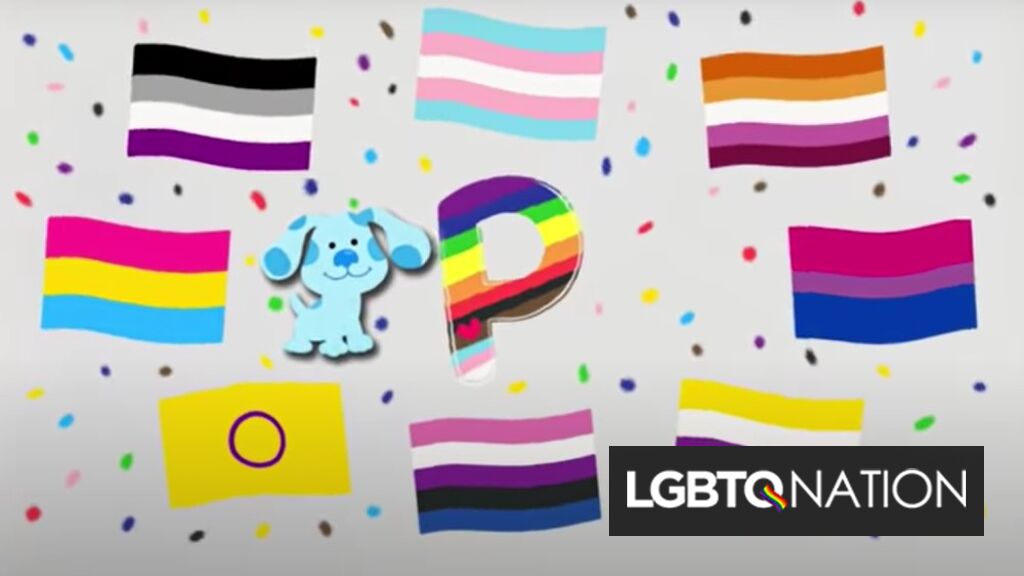 One Million Moms, the evangelical astroturf group funded by the American Family Association, a certified anti-LGBTQ hate group, appears to have taken a break from being outraged by an “extremely offensive” commercial on electric cars and dolls with fictional family members.

The hit children’s series Blues Clues & You! had a special message in a recent video.

The Nickelodeon show – which is a reboot of the hit 1996 show Blues Clues – posted a video to YouTube with a song about the alphabet. And the song said that “P” stands for “Pride.”

The letters float across the screen several times before the song gets to the letter P, but the P is in rainbow flag colors and trans flag colors – along with the brown and black stripes for the rainbow flag – because their P has just that much Pride.

“The first thing that came to my mind was P is for pride when I got the script,” said animator Sammi WS Chan. “I am so excited that all of ya’ll are as happy as I am! I also did all the letters and graphics for this episode to be as inclusive as possible for Black History Month.”

In an unsurprising twist, One Million Moms director Monica Cole caught wind – more than two weeks after its airing – and suddenly launched a petition deriding Nickelodeon, a children’s television network under the CBSViacom conglomerate, for “forcing” the “LGBTQ agenda… on families and children.”

“It is apparent that this network continues to indoctrinate children by exposing them to the LGBTQ lifestyle and presenting it as normal,” Cole wrote.

“With such a liberal push in children’s educational entertainment, it is obvious where Nickelodeon stands. This pride-laced ABC song makes it clear that Nickelodeon has an LGBTQ agenda that it is forcing on really young audiences.”

The front for the hate group not only asks supporters to signal that they “don’t agree with the LGBTQ agenda” and to not “support [Nickelodeon] as long as the network veers away from family-friendly entertainment,” but to push their friends to “do the same.”

Most recently, Will Ferrell dared to say “the d-word” in a General Motors commercial aired during the Super Bowl featuring Kenan Thompson and Awkwafina. “GM is irresponsible to air such a commercial, especially when families are likely to be watching,” Cole claimed.

Prior to that, the outrage Cole was focused on was American Girl doing what anti-LGBTQ people find unthinkable: introducing a doll with LGBTQ family members.

“Conservative parents are outraged! American Girl released its first doll with an accompanying book that has an LGBTQ storyline. This is unacceptable! …American Girl is attempting to desensitize our youth by featuring a storyline with two lesbian aunts,” Cole whined.

Cole is the sole employee behind One Million Moms, which is really an arm for the American Family Association (AFA), a hate group designated by the Southern Poverty Law Center (SPLC) for years. The group’s “petitions” are really just a generic contact form that signs you up for their emails.

In just over 24 hours, the AFA claims to have 10,000 “signatures” on their “petition.” That’s way less than the 17,000 people she claimed to have directing anger at American Girl, a Mattel-owned brand.

Still stinging from nearly causing Hallmark to ban an ad with a lesbian couple, before the company’s management stepped in and did a 180, Cole made a push in 2020 against all sorts of brands that dared show support for LGBTQ people. Whether it was cartoons with dogs, dishwashing liquid, fruit, hummus, movies with cyclops, or wrapping paper, the One Million Moms group has been there, trying to cancel anyone who dares recognize the existence of LGBTQ people.