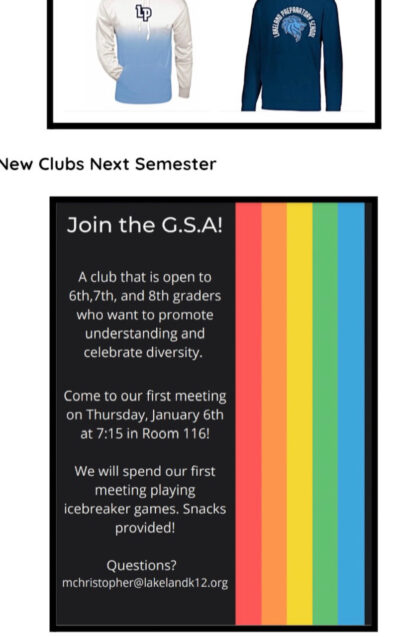 Parents in Lakeland, Tennessee are enraged that the school board is allowing a Gay-Straight Alliance (GSA) to form at a district middle school.

So angry that many of them are accusing the teacher who sponsored the GSA of being a “predator.”

Related: This school wants to out Gay-Straight Alliance members. The students are suing.

Earlier this year, students formed a GSA at Lakeland Middle Preparatory School. A GSA, sometimes called a Gender-Sexuality Alliance, is a student club that provides a safe space for LGBTQ students to learn about who they are and a break from the anti-LGBTQ bullying that is rampant in schools.

The school announced the GSA in its weekly email to parents with a graphic that explained that the club will meet in January for the first time for “playing icebreaker games. Snacks provided!”

“Where do we draw the line?” parent Matt Thie said at a Lakeland School Board meeting last week, threatening to remove his three children from the school district because of a club no one is required to attend. He said it was “inexcusable” for children to learn about sexuality at that age.

Parent Heather Reynolds told the school board that the club will “indoctrinate” her kids, and they won’t be able to avoid it by not going.

“It’s going to be advertised in emails, over the intercom system and posters in the halls trying to bait 10, 11 and 12-year-old kids into their club meetings,” she said, as if “snacks” will turn her kids gay.

This is the email announcement being called inappropriate.

The school board said that it had to either approve the club or ban all clubs because of the Equal Access Act of 1984. That law was originally passed to appease Christian activists who were worried schools would ban Bible clubs. It prevents schools from banning clubs based on the subjects they discuss as long as they aren’t disruptive and follow content-neutral rules.

But things got much uglier at a board meeting this week, after the teacher who sponsored the GSA, drama teacher Mandy Christopher, was accused of being a “predator.”

The accusation stemmed from a TikTok video that showed Christopher talking to a student in a parked car. Parents told the school board at the meeting this past Monday that it was “disturbing.” The video has been deleted and Lakeland Currents reporter Matt Wright said it’s “unclear” what the video actually showed despite it being a central topic of discussion at the meeting.

A woman who identified herself as the grandmother of the student in the video spoke at the meeting: “Ms. Christopher is not a predator, she’s just a friend.” She said that her granddaughter is queer and wants to attend the GSA.

Others at the meeting continued to attack the club.

“It’s not appropriate,” said parent Rachel Goss, adding that kids who have “sexual problems” should talk to counselors, not clubs.

Parent Sara Mace said that her two kids at the school will still be “exposed” to the GSA even if they don’t attend it, referring to the announcement for it.

Other parents said that GSAs are about “far left indoctrination”

“We moved here for schools, but we will move back out of Lakeland,” one father said.

Board attorney Eric Plumlee said that the legal answer is simple: “Either all non-curricular clubs are allowed, or none of them are allowed.”

Board Chair Kevin Floyd said that the club will be banned until January 10 next year – the first meeting was supposed to be on January 6 – so that the board can get another legal opinion.

GSAs have been around since the 1980s, and schools have repeatedly tried to ban them. The ACLU noted in 2018 that there have been 19 federal court decisions in favor of students’ rights to form a GSA.

A 2020 study by the University of Connecticut found that the presence of a GSA decreased bullying in schools and not just anti-LGBTQ bullying.