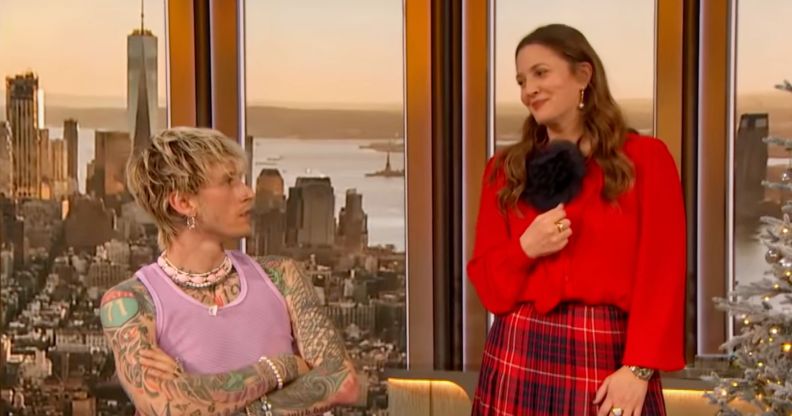 Drew Barrymore is the new, undisputed queen of the talk show. (CBS)

A clip of Drew Barrymore comforting Machine Gun Kelly after he admitted he was struggling proves why she’s a different class of talk show host.

In a video taken from a December 2021 episode of her talk show The Drew Barrymore Show, the talk show host, rain enthusiast, Golden Globe winner and all-round pure soul comforts Machine Gun Kelly as he opens up about having a “weird” day.

“I’m sick of smiling on days where I don’t feel like smiling… I haven’t given myself the time to accept that it’s OK to not be OK.”

Barrymore listens intently as the singer talks, before telling him: “You’re in a really safe space.”

Sharing her own vulnerabilities, Barrymore continues: “The other day I walked in here and I started crying at the beginning of the intro. We started here in a pandemic and everybody was terrified.

“I think this show, this space, was born in a time where we get to keep it very real and be honest. Maybe you can feel that in the room and feel safe.”

As Machine Gun Kelly paints her nails, Drew Barrymore explains how she reached out to people for support during her “painful” divorce from Will Kopelman.

“I wasn’t doing very well… I had these two kids that I had to fight for, and I needed help, so I started reaching out to different people and eventually I made some big sweeping changes in my life,” she says.

Barrymore’s approach to the interview has been widely praised as the clip has gone viral on Twitter and TikTok, with many hailing her as the “perfect” and “most sincere” talk show host.

“She is constantly present, doesn’t talk over her guests, and makes them feel comfortable to the point that they’re able to feel safe and vulnerable,” one person wrote on social media. “She doesn’t do it for the clout, but to truly hear the stories others have to tell. It’s incredibly therapeutic.”

“Drew shared her own vulnerability, which is why this is a safe space. It’s so easy to get caught up in ‘celebrity’ and forget that these are real, authentic people with their own challenges that can be amplified by the artificially contrived world we see them exist in,” another wrote.

Barrymore’s style is worlds away from the likes of Ellen DeGeneres, who was accused of being “mean” and unwelcoming by some guests.

In one clip that resurfaced recently, DeGeneres forces a visibly uncomfortable Taylor Swift to confirm or deny whether she has dated certain actors as their faces appear on the large screen behind them.

The Ellen DeGeneres Show ended in May 2022 after a major fall-out for the show and its host.

It was alleged that the set had become a toxic workplace, with claims resulting in the departures of several producers. DeGeneres, who was not implicated in the claims, apologised, and has said the show ending had nothing to do with the controversies.