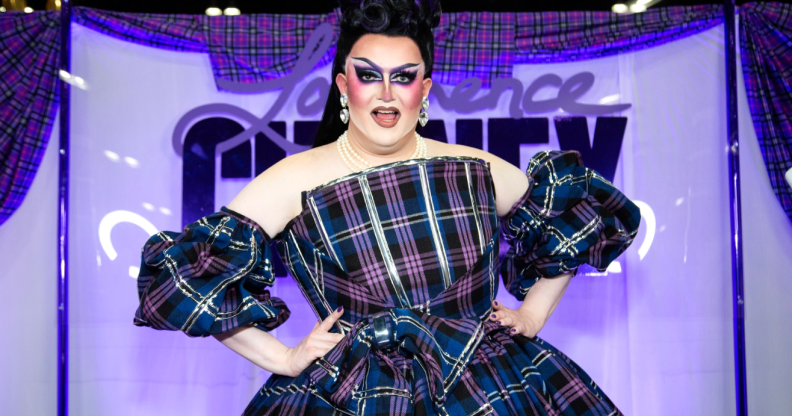 The show features Chaney galivanting around Scotland, taking celebs on the road trip of a lifetime.

“Alright hens, mens and they/thems. I’m Lawrence Chaney,” the fan favourite says in the clip alongside aerial shots of Scotland and suitably fabulous b-roll of Chaney in her signature purple tartan and stonking great crown.

But of course – there’s a “big, huge, glorious” Chaney twist – they’ll all be in drag!

With a fabulous drag makeover by Chaney, the celebrities will surprise their “families, friends and a few of the locals”, gaining an insight into who they are and where they came from.

“Scottish drag icon Lawrence Chaney takes a mystery celebrity back to their roots with a trip to their hometown,” reads an official synopsis from BBC Scotland.

“And as it’s Lawrence, the celebrity experiences it from a very different perspective – they are going to be disguised in drag!

“Our celebrity will have their very own drag persona, created by Lawrence, with which to surprise their families and friends and throw the locals off their scent. This curated queen will also have the freedom to be as flamboyant and fantastic as they wish.”

No information has yet been released on the identities of the celebrities taking part in the show, although we’ll be fuming if former Drag Race UK guest star Lorraine Kelly doesn’t make an appearance somewhere.

Fans are elated at the news, with fellow Drag Race UK contestant and Drag Race UK Vs. The World winner Blu Hydrangea offering her congratulations.

Chaney beat runners-up Tayce and Bimini Bon Boulash for the crown and sceptre of Drag Race UK’s second season in 2021.

Since then, she has been fiercely campaigning for Scottish independence, starred in Tartan Around as part of her Drag Race UK prize and even appeared to welcome Danny Beard into crowned queen corner alongside Thee Vivienne and Krystal Versace at the end of season four.

Lawrence Chaney’s Homecoming Queens will air on BBC Scotland and iPlayer on 27 December 2022.