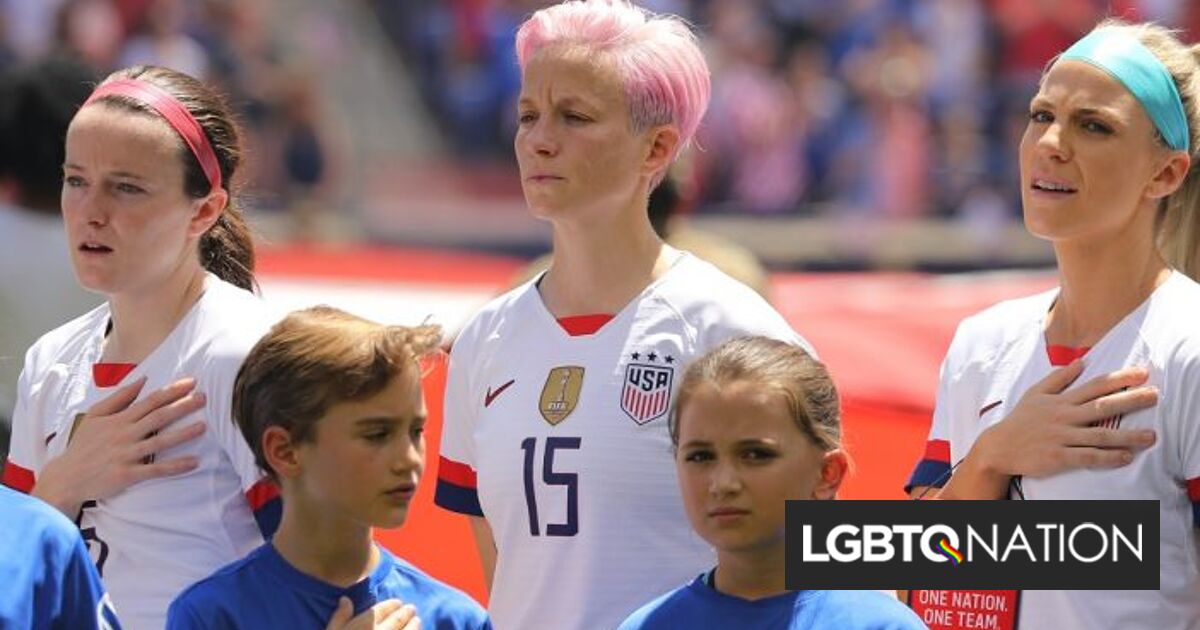 At a rally in downtown Phoenix, Arizona last night, former President Donald Trump proudly led the crowd to denounce their own national women’s soccer team following their loss at the Tokyo Olympics.

Trump was simply following up several other conservatives and anti-LGBTQ activists that cheered the single loss by a team that’s won 40 of its last 44 matches. By the time Trump made his remarks, though, the team had already rebounded by beating New Zealand.

Related: Megan Rapinoe burns Caitlyn Jenner over her “not exceptional” foray into politics

The soccer portion of the Olympics began on July 21 with the first of the group stage games. The U.S. women’s national soccer team (USWNT) played Sweden first and lost, 3-0.

The loss didn’t eliminate them, they just didn’t gain any points toward qualifying for the quarterfinals. That didn’t stop the team’s haters from showing how elated they are that the women had suffered their first loss in a professional game since January 19, 2019.

It’s not surprising, since many were so hungry to pounce on such an opportunity, they had falsely accused the team of disrespecting the flag and a veteran performing the national anthem earlier this month.

Matt Walsh, Rodney Howard-Browne, and Dinesh D’Souza were all among the not-so-well wishers online immediately after.

The USWNT’s next match was against New Zealand, which they easily won 6-1 on July 25 (Japan is across the International Date Line).

But tonight we bounced back 😤 🇺🇸

Goals and great resolve on display tonight in the #USWNT’s 6-1 victory over New Zealand. One match to go in the #Tokyo2020 group stage!

That didn’t stop Trump from remarking on an opportunity to address their once-in-a-blue-moon failure.

“Wokeism make you lose,” he claimed. “The U.S. Women’s Soccer Team is a very good example of that.”

Sharing their score in the loss earlier this weekend, Trump declared, “Americans were happy about it.”

Politico reported that the crowd’s booing of the USWNT “was perhaps only matched” by the crowd’s reaction when Trump bought up his former Vice President, Mike Pence.

“I only wish that my friend Mike Pence had that additional courage to send the results back to the legislatures,” he said.

The remarks were made at a Turning Point USA gathering in Arizona, just miles from where Arizona’s election “audit” is taking place, nine months after the Presidential election results. This week alone at the “audit,” there has been a leak in the facility they were operating in, the “audit” director was removed and lost privileges to enter the audit premises, and both the state’s Secretary of State and biggest county, Maricopa County, have denounced the proceedings.

Meanwhile, a representative of the current administration — First Lady Dr. Jill Biden — cheered them on from the stadium. The team evidently welcomed her support.

Despite the USWNT’s overwhelming success — which includes four Olympic Gold medals, four women’s World Cup titles, and eight Gold Cup championships — they have been on the receiving end of Trump’s ire for years, mainly due to his back-and-forth remarks with team star Megan Rapinoe.

In 2019, Rapinoe angered then President Donald Trump and other conservatives by answering “No fuckin’ way” when asked if she and her teammates would visit the White House after winning the World Cup. This was after she kneeled during the National Anthem before matches beginning in 2016, in solidarity with NFL player Colin Kaepernick. She said that she wasn’t being disrespectful of the flag, but “speaking out for people that are oppressed.”

Trump responded by tweeting, “Megan should never disrespect our Country, the White House, or our Flag, especially since so much has been done for her & the team.”

“The spewing of hate and the ‘othering’ of the rest of the country has only led to more strife between people and more despair and more anxiety and more fear going forward,” Rapinoe said at the time.

The team has also received criticism for their pay disparity lawsuit against U.S. Soccer, which alleges that the team is paid less than the U.S. Soccer Men’s National team, despite having more success as of late. Lawyers for the team filed appeals to continue pursuing litigation in federal court this week.

The USWNT’s next match is against Australia on July 27.

There are four out teammates on this year’s Olympic USWNT squad: Rapinoe, Kelly O’Hara, Adrianna Franch, and Tierna Davidson. They are some of the 30 out athletes representing the United States, out of an estimated 163 across the world, in Tokyo for the next month.