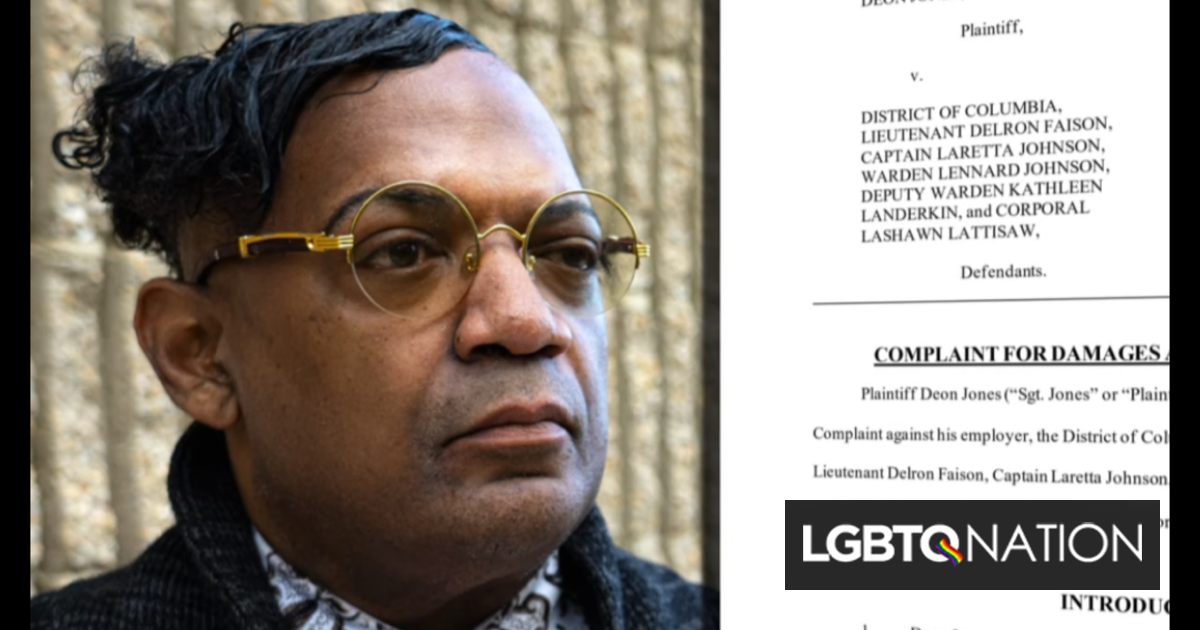 A lawsuit has been filed on behalf of Sgt. Deon Jones, a 24-year veteran corrections officer, by the American Civil Liberties Union (ACLU) against the Washington, D.C. government, the District of Columbia Department of Corrections (DOC), and numerous officials for violating the city’s Human Rights Act for allowing the discrimination and abuse Jones allegedly endures at work because he’s gay.

While working at the DOC-managed DC Jail, Jones “endured pervasive acts of harassment based on his sexual orientation” that were so bad, he eventually suffered from more than 15 panic attacks and was diagnosed both with Post Traumatic Stress Disorder (“PTSD”) and Major Depressive Disorder, the ACLU states.

Related: Officer dressed as a woman was pistol whipped by attacker who then stole his puppy

Filed in DC Superior Court, Jones and the ACLU are seeking compensatory reward and punitive action against the D.C. city government and DOC officials.

Jones first began working for DOC in 1992, was laid off in 2001 and returned in 2006. He currently is a medical liaison with the rank of Sergeant.

Although he has “received numerous commendations and awards for his service,” including a “Flag Detail Fraternal Order of Police (“FOP”) Law Enforcement Award [and] FOP/DOC Outstanding Professional Employee Award,” among others, he also accuses the defendants of “longstanding and pervasive practice of discrimination, the creation of a hostile work environment, [retaliation] and the… failure to make reasonable accommodations for Sgt.
Jones’s disabilities,” which includes diabetes.

Jones alleges that not only did he received verbal abuse and threats from inmates that he supervised, his own co-workers and fellow correctional staff called him slurs and verbally abused him, with some telling him they “don’t like faggot or sissies” and “hate working with faggots.” The lawsuit says that he has been repeatedly called “faggot, “old faggot,” “faggot mess,” and “dick eater” by co-workers and even senior staff at DOC.

Not only did Jones receive verbal disrespect, but he often had his “safety at risk” because other officers were “refusing to answer his calls for assistance over the internal radio system when he was responding to inmates or attempting to execute his duties.”

Jones also alleges that he was “almost raped” once, when he was left alone in an elevator with “an inmate who said he would cut my throat.” He alleges a supervisor was on duty at the time but did nothing to help him.

“It’s like they torture my soul,” Jones said in an interview with FOX 5 DC. “I’m being persecuted for who I am when I serve with dignity, honor and respect. I don’t get that back. I’m treated like trash.”

“This is a horrific pattern of discrimination and retaliation that was known to the highest level officials and ignored,” Scott Michelman, the Legal Director of ACLU District of Columbia told FOX 5 DC.

This is one of several lawsuits filed against the DOC and other officials due to the conditions and practices at the DC Jail.

Bowser, asked by the Washington Blade to comment, said the issues regarding the jail’s lawsuits may stem from the “stress” the pandemic put on corrections staff.

“You know there is not a lot I can say about it, but we look at all allegations to make sure that we’re addressing anything acutely, but also dealing with the lawsuit itself,” she said.

“We’re looking forward to a time when we can roll back some of those COVID protocols in the jail and to keep the incidents of COVID down. And I know that will improve the operations,” Bowser, who is running for a third term in 2022, added.

This is not the first time Jones has sued the DOC. He previously sued in 2006 for discrimination and harassment, and he settled with them in 2011. He also settled another dispute over his treatment at the DOC in 2019.