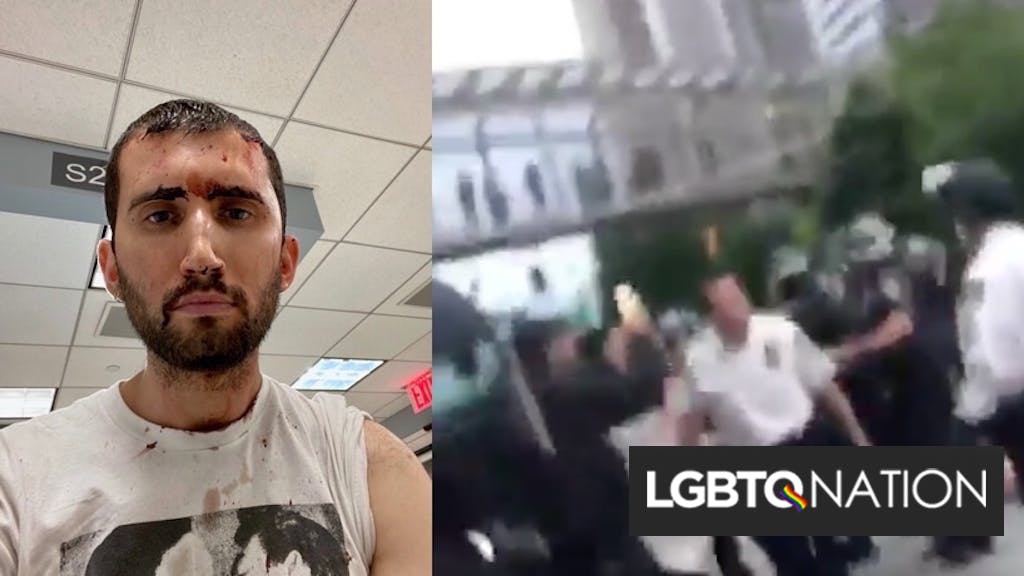 A protest against police brutality at the Stonewall Inn ended in violence on Tuesday after police officers attacked demonstrators causing severe injuries. The protest was the second consecutive night of demonstrations to honor queer and people of color who have died at the hands of police.

ACT UP NY social media manager Jason Rosenberg and city council candidate Marti Gould Cummings were among those arrested and injured. Rosenberg’s arm was broken and he required multiple staples to close wounds on his head.

Related: Police opened fire on a gay bar because the owner was handing out water to protestors

Both Cummings and Rosenberg were held in police custody along with other activists for approximately 11 hours. Neither were offered medical treatment or masks to prevent coronavirus.

In a video posted to Twitter after being released, a blood-covered Rosenberg described what happened and showed his still-dangling arm.

“We were peacefully protesting… and we started to see some escalation and we sorta kept moving and a lot of us linked arms in solidarity and civil disobedience, which is not resisting arrest,” he said.

Thousands had rallied at the 5 p.m. demonstration with most leaving before an 8 p.m. curfew instituted by Mayor Bill De Blasio (D) went into effect. Shortly after the curfew started, police attacked the crowd.

“I never witnessed anything like this in my life,” protestor Evan Catlett told Gay City News. Catlett was arrested and hit in the head with a baton at a previous protest.

Last night I joined thousands of protesters to demand justice for George Floyd & all the black lives who have been lost because of police violence. At 8:15pm the NYPD began to use batons & violent force to arrest peaceful protestors, myself being one of them.

An update: Got 9 staples in the head and got a bad arm break. Most likely going straight to surgery soon. Thanks for the concern and wishes. We’re gonna be alright here.

Last night a 29 year man in the wagon to jail said he hasn’t spoken to his sister in 12 years bc she is queer but seeing lgbqtia people marching for #BLM has opened his eyes and he said he will be calling her right upon release. It was beautiful moment amid the chaos of the night