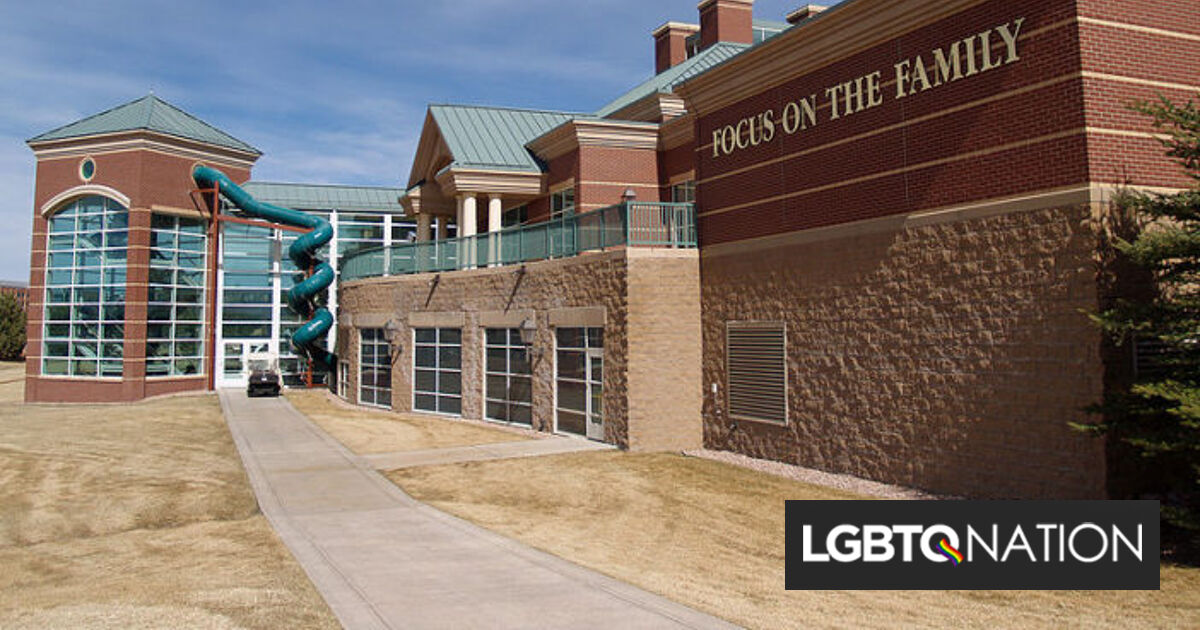 Colorado Springs, Colorado — home of Club Q, a gay bar where a Saturday night mass shooting killed five and injured 18 — is arguably one of the most anti-LGBTQ cities in the nation because it’s home to Focus on the Family (FOF), a large and decades-old Christian anti-queer hate group that is one of the most vociferously anti-LGBTQ outfits in the nation.

FOF was founded in 1977 by James Dobson. It is possibly the largest theocratic-right organization in the United States.

The group — which recently registered with the IRS as a church to hide its donors — has a four-building, 47-acre complex in north Colorado. It has raised over $515 million budget in the past years, much of which goes towards anti-LGBTQ public campaigns and anti-LGBT candidates championed by FOF’s related organization, CitizenLink. FOF has over 800 employees, 14 international offices, and partnerships in 60 countries.

FOF opposes same-sex marriage and sex education in schools (except “abstinence-only”), supports so-called conversion therapy, and generally opposes anything that promotes the so-called “homosexual agenda” — even concepts of tolerance and diversity which, according to Dobson, are “buzzwords for homosexual advocacy.” The group has called the LGBTQ rights movement a “particularly evil lie of Satan.”

Dobson also compared proponents of same-sex marriage to Nazis who want “the utter destruction of the family.”

According to the group, the goals of the “homosexual movement” include “universal acceptance of the gay lifestyle, the discrediting of Scriptures that condemn homosexuality, muzzling of the clergy and Christian media, granting special privileges and rights in the law, overturning laws prohibiting pedophilia, indoctrination of children and future generations through public education, and securing all the legal benefits of marriage for any two or more people who claim to have homosexual tendencies.”

In 1998, FOF formed Love Won Out, a ministry promoting conversion therapy. Such therapies see LGBTQ identity as a mental disorder or anti-Christian spiritual conflict that must be burnt out using widely disavowed psychological torture. Most major American medical and psychological associations have condemned the practice.

The group also created a “Day of Dialogue” event for public school students, specifically meant to counter the “Day of Silence,” an annual student-led protest against anti-LGBTQ bullying. The Day of Dialogue was effectively started by two other anti-LGBTQ groups in 2005: the legal group Alliance Defending Freedom (ADF) and the now-defunct ex-gay therapy group Exodus International, and taken over by FOF in 2010.

FOF has also said that workplace anti-discrimination legislation “must be stopped” because, if passed, employers might face the consequences for firing queer people for no other reason than their “moral convictions.” Jim Daly, the CEO of FOF for the last decade, said marriage equality means destroying civilization.

Even without FOF, the Colorado Springs area is deeply conservative.

The district’s House Rep. Doug Lamborn (R) — who was just re-elected by a margin of over 56 percent — opposes same-sex marriage, supports anti-LGBTQ people discrimination, and recently introduced the so-called “Stop the Sexualization of Children Act,” a national bill that would ban LGBTQ identities from classrooms. He has previously called to end funding for PBS over a gay cartoon rat and a queer celeb appearing on Sesame Street.