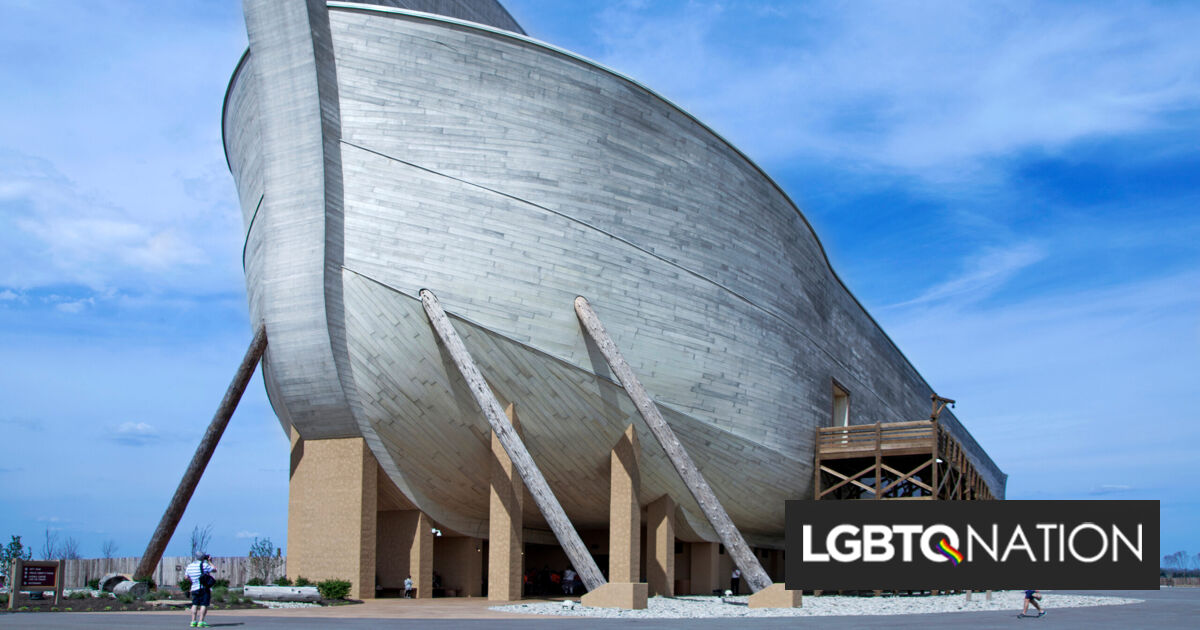 A 40-day music festival billing itself as the “largest Christian music festival” has canceled its relationship with a major sponsor just days before the event begins because an employee for the festival organizers researched them and learned that they have dared to work with LGBTQ people before.

The 40 Days and 40 Nights Christian Music Festival is about to commence at the Ark Encounter amidst a pandemic in Williamstown, Kentucky, where over 484,000 have been infected with coronavirus and an estimated 7,400 people have died. But they draw the line when it comes to companies that associate with LGBTQ people.

The music festival is being organized by Answers in Genesis (AiG), a Christian fundamentalist, anti-LGBTQ group. They primarily operate the Creation Museum located in Kentucky. Jennifer Hall Rivera, the Education Content Administrator for the group, recently claimed that God made noses because of “sinners.”

“God designed humans very specifically, with this nasal bone, because He knew because of sin we’d be wearing glasses and contacts, right? So this helps hold our glasses,” Rivera claimed.

AIG also owns the Ark Encounter, a a fundamentalist Christian theme park that boasts a “life-size Noah’s Ark.” AiG founder and preacher Ken Ham has been using the “ark” in repeated attempts to “reclaim” the rainbow from LGBTQ people, because LGBTQ people apparently ‘stole’ it from God, and Ham believes it’s up to him to take it back.

With the upcoming festival, Ham welcomed partnerships and sponsorships with several Christian organizations, including Holt International, a private Christian adoption agency. All was well until an employee of AiG “dug deep” into the organization and began investigating their past for no specified reason.

What he found was shocking, at least to Ham.

In a blog post, complete with an altered stock image of a Pride flag flying over an unnamed adoption agency, Ham said that “Another well-known Christian organization” had been caught “going soft on the LGBTQ movement.”

The employee apparently “did a deep dive Holt International’s website, Ham said, and found that the agency had dared to list the eligibility that different people had to adopt in various jurisdictions. Holt International included information on whether or not people they would accept marriage licenses from same-sex couples or provide resources to known LGBTQ clients.

“It seems, one by one, many churches and Christian organizations are caving to the immense pressure of the LGBTQ movement and even the social justice movement and Marxist critical race theory,” Ham bemoaned.

Ham contacted the agency twice demanding that if “they don’t change their position on these matters, we can no longer have any sponsorship relationship.” He said that it appeared Holt International did not alter its business model enough to work with the creationists, although they allegedly took down the web pages that Ham and his employees found and cited.

Holt explained via email that as an adoption agency, they are required to conform with several laws in order to operate in different jurisdictions, even if they may conflict with the religious views of the organization. Ham didn’t care.

“Surely the overriding factor has to be that like the Apostle Peter and the other apostles in Acts 5:29, ‘We must obey God rather than men,’” he shot back via emails he published in the blog post.

In Ham’s view, the agency should take on the legal battle that several other adoption agencies already have undertaken, and are undertaking, trying to combat anti-discrimination laws all the way up to the Supreme Court. Because Holt was unwilling to do that, Ham could not work with them in good faith.

“So where will such an organization be in the future as this door to accommodate LGBTQ agendas is opened further? That’s the issue,” he claimed.

So the two sides are going their separate ways. Instead of advocating against them, though, Holt uses the opportunity to ask readers to supporrt the festival directly in lieu of the ended “relationship.”

The 40 Days and 40 Nights Christian Music Festival will continue on, starting on Monday, August 2 and running until September 10. There are no restrictions noted on their website in light of the ongoing coronavirus pandemic, and it’s not clear if vaccinations are required or encouraged.

Ham has continued to tweet about LGBTQ people starring in Disney shows, the LGBTQ community he is sure is on a litany of “agendas,” and supposed “cancel culture” not going after evolution theory — but not the sponsor he just canceled himself.

The article states: “The episode — named “The Transformation” — premiered…features Disney’s first LGBTQ+ love song… “Not only are we playing queer characters, but we’re also on a Disney show that has an openly gay showrunner advocating to make https://t.co/qfkDoJ6fZy

Another example of the LGBT movement out to capture kids. “Arise, O LORD! Let not man prevail; let the nations be judged before you!” (Psalm 9:19) https://t.co/QubMRpPPoH

the senses and hands…the average standard of mental power in man must be above that of woman.” Charles Darwin said it in his racist book “The Descent of Man.” Of course the cancel culture won’t touch Darwin as he’s revered as the high priest of the religion of evolution!