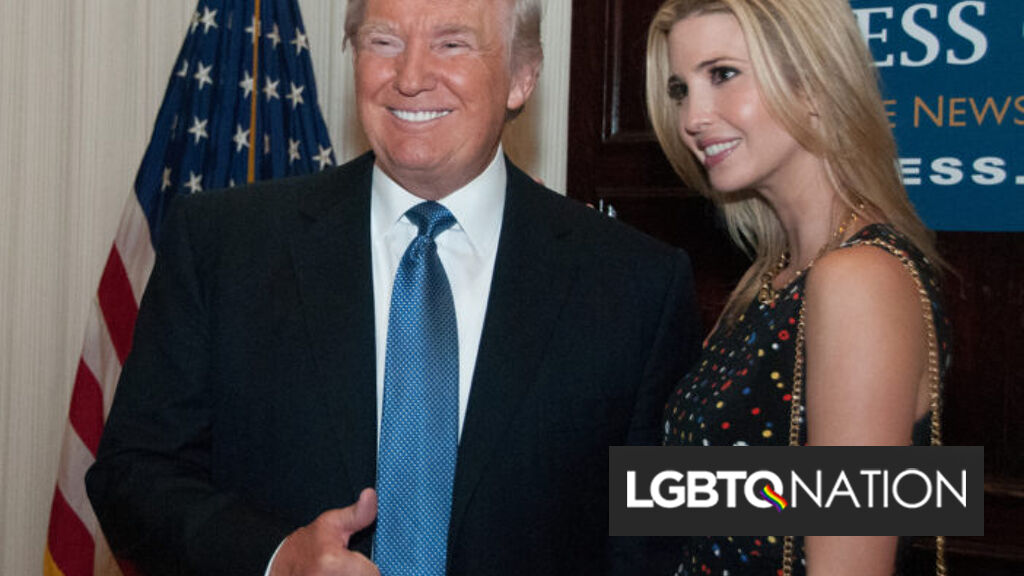 Notorious homophobe Scott Lively is blaming Donald Trump’s loss in the 2020 elections on his daughter Ivanka, saying that she was “the Eve in the Garden of Trump’s own family convincing him to eat the apple of pro-gay political correctness.”

Lively explained in a bizarre rant earlier this week that the real reason Trump lost the election was because he was too pro-gay, despite his administration’s many attacks on LGBTQ equality. And now Lively has narrowed his attack to a sexist conspiracy theory: a sinister woman led the noble Donald Trump astray, and that woman’s name is Ivanka.

Related: Ivanka Trump is in “panic” as she worries about her career prospects after the White House

Lively is a longtime anti-LGBTQ activist, best known for his 1995 book The Pink Swastika where he claimed “homosexuals [are] the true inventors of Nazism and the guiding force behind many Nazi atrocities.” He has also worked with leaders in Uganda, Latvia, and Russia to implement harsher anti-LGBTQ laws.

Now he has posted a video online telling his followers that Trump lost the 2020 election “because we did not fight the dragon at the center of the Marxist agenda, but allowed that snake inside our own camp: homosexual perversion.”

Trump’s “own daughter Ivanka was seduced by the allure of queer theory pop culture propaganda,” Lively said, clearly not understanding what queer theory is.

What exactly did Ivanka Trump do? Lively cited a 2017 Politico article where anonymous sources claimed that Ivanka Trump and Jared Kushner persuaded Donald Trump not to sign an anti-LGBTQ executive order.

Even though Donald Trump went on to attack LGBTQ equal rights protections in many other ways, Lively said that Ivanka Trump “persuaded her father to openly defy God’s unequivocal command” to be straight.

“If God had wanted Donald Trump to remain in the presidency, nothing in heaven or on the Earth could have dislodged him. Instead, just as first Israel and then Judah were expelled from the Holy Land by wicked conquerors for ignoring Leviticus 18, God allowed Donald Trump to be expelled from the White House by obviously corrupt and senile Joe Biden and his sneering Jezebel sidekick, riding a tidal wave of insultingly blatant election fraud.”

There is no evidence that Biden was elected due to election fraud, despite numerous court cases and investigations. But the conspiracy theory is popular on the right, and conservative conspiracy theories are Lively’s forte.

Despite his insistence that Ivanka Trump is the greatest ally LGBTQ people have ever known, she’s not exactly popular among queer and trans people. She was on the receiving end of massive criticism in June 2020 when she tweeted “Less hate, more love!” in a Pride message after working for the Trump administration for over three years at that point, which had been steam-rolling over LGBTQ protections and rights. She was even caught donating $50,000 to a church that says homosexuality is an “individual choice.”

Lively used to work with the American Family Association and he founded Abiding Truth Ministries in California, an SPLC designated hate group. He has said that LGBTQ people are “pedophilic” and “genocidal.”

He has also worked with anti-LGBTQ activists in other countries, and he was sued by the Center for Constitutional Rights on behalf of LGBTQ Ugandans in 2012 for his work to promote the death penalty for homosexuality in that country, including telling Uganda’s parliament that homosexuality is a “disease” that Western society is trying to spread to children.

“They’re looking for other people to be able to prey upon,” Lively said. “When they see a child that’s from a broken home it’s like they have a flashing neon sign over their head.”

The lawsuit for crimes against humanity was later dismissed for technical reasons.