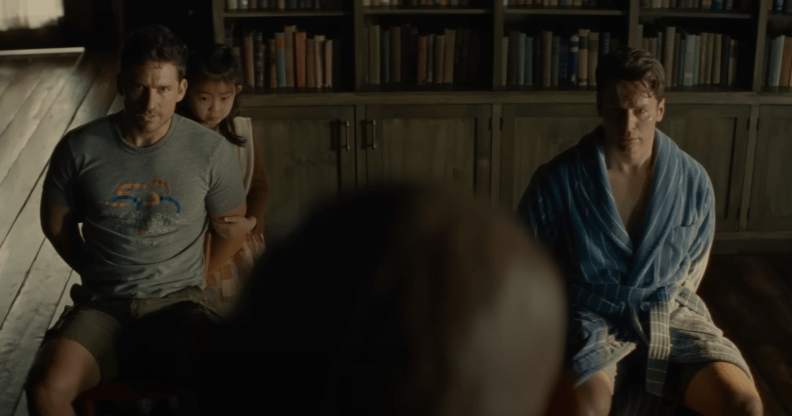 Thrills aplenty are in store when there’s a Knock at the Cabin. (YouTube/Universal Pictures)

The second trailer for the upcoming apocalyptic psychological horror film Knock at the Cabin gives fans full plot details for the first time.

Adapted from the acclaimed 2018 horror novel The Cabin at the End of the World by horror master M Night Shyamalan, the film depicts a family of three – two dads and their daughter – who are confronted by a group of strangers demanding that they must sacrifice one family member to avert the apocalypse.

Starring Jonathon Groff and Ben Aldridge as Andrew and Eric, a gay couple vacationing with their adorable daughter Wen (Kristen Cui), the family are shocked by the arrival of Leonard (Dave Bautista) and three other people (Nikki Amuka-Bird, Abby Quinn and Rupert Grint).

The strangers give the trio a choice: sacrifice one member of their “flawed and perfect” family, or the world will end.

Andrew believes that their attack is rooted in homophobia, though Leonard maintains his story that they have no intention to harm the three, but the family must choose who to sacrifice in order to prevent the apocalypse.

As Bautista chillingly puts it: “For every ‘No’ you give us, hundreds of thousands of people are going to die.”

Obviously editing trickery is often afoot in trailers, so these might not be directly cause-and-effect, but following the refusal to kill one of their own family, we then see a news report of giant tidal waves sweeping through people on the beach.

Other apocalyptic events that we see in the Knock at the Cabin trailer include a plane crash right over the cabin and a bolt of lightning hitting the trees.

We’re also shown a foiled escape attempt by Wen, several large pieces of vicious-looking equipment being swung into several other people’s body parts and Groff’s Andrew in tears as asked whether his husband really believes that cataclysmic events they’re seeing are “all just a coincidence”.

Knock At The Cabin is due to be released in cinemas on 3 February 2023.