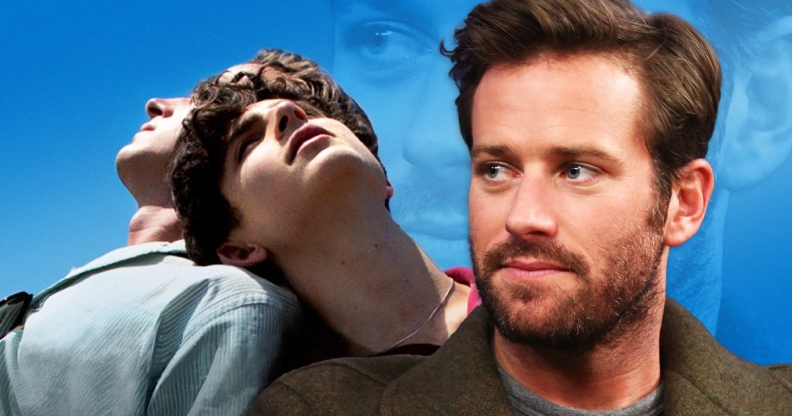 Armie Hammer’s Call Me By Your Name character Oliver could be in a follow-up. (Sony Movie Poster/Getty)

Armie Hammer’s Call Me by Your Name character could still appear in a follow-up, should the long-awaited sequel ever go ahead.

The film’s director, Luca Guadagnino, who has previously all but ruled out a second movie, said that there would still be potential for Hammer’s character Oliver to return to the film – despite numerous allegations of abuse and sexual misconduct plaguing the actor.

Speaking to Variety while promoting cannibal romance Bones and All, Guadangnino’s latest project with Armie Hammer’s Call Me By Your Name co-star Timothée Chalamet, the director said that there was “of course” scope for Hammer’s character to return.

“I would love to make a second and third and fourth chapter of all my movies,” Guadangnino said. “Why? Because I truly love the actors I work with, so I want to repeat the joy of doing what we did together.”

However, Guadangnino appeared to pour even more cold water on the hopes of a sequel ever making it to screen, saying: “There is no hypothesis, so there is no movie.”

“It’s a wish and a desire, and I have not made up my mind about what would be the story,” he added, before suggesting that a sequel could instead explore the life of Mafalda, who is the housekeeper to Chalamet’s character Elio and his family.

Armie Hammer, 36, has largely remained out of the spotlight since allegations of abuse surfaced in early 2021, having exited projects including Jennifer Lopez’s Shotgun Wedding and thriller Billion Dollar Spy. The actor checked into rehab last June, and his most recent film Death on the Nile was released in February.

Allegations of abusive behaviour against Hammer began to surface in January 2021, when an Instagram user called “House of Effie” shared a series of disturbingly graphic, cannibalistic messages allegedly sent by the actor.

In one message, Hammer allegedly told a woman he was “100 per cent a cannibal”, while another reads: “I will own you. That’s my soul. My brain. My spirit. My body.

Hammer was also accused of rape and sexual abuse after the initial allegations became public. A woman, identified only as Effie, said that Hammer raped her while the pair were dating in 2017. She also accused him of slamming her face into a wall and becoming “increasingly violent”.

A new docuseries entitled House of Hammer, released on Discovery+ in September, explores the numerous allegations against the actor. In it,  two of his former girlfriends, Courtney Vucekovich and Julia Morrison, discuss their experience with the star.

In the trailer for the three-part series, Vucekovich and Morrison emotionally recount how Hammer would “push boundaries”. At one point, Morrison reads out a text message, allegedly from Hammer, that says: “I have a fantasy about having someone prove their love and devotion and tying them up in a public place at night and making their body free for use.”

Hammer has repeatedly denied all accusations of wrongdoing against him, with his attorney Andrew Bretller previously telling The Independent the claims are “outrageous allegations” and that all interactions Hammer has had with his sexual partners were “completely consensual”.