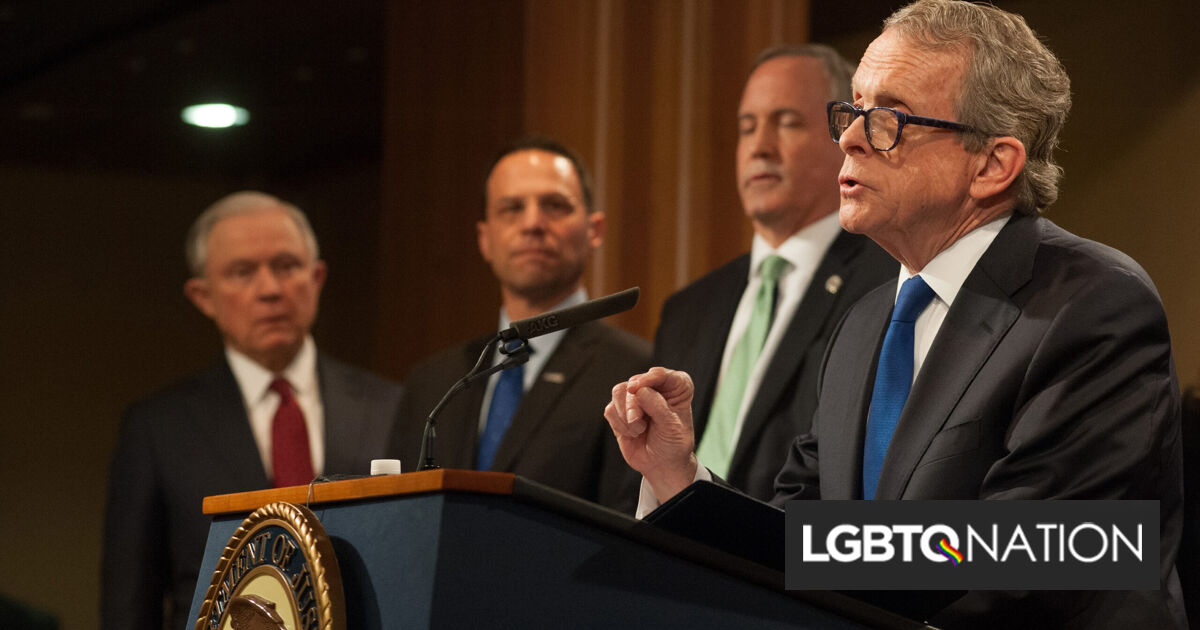 Starting September 30, California will not allow any trip from the Golden State to the state of Ohio to be paid entirely by state funds. It’s a ban as part of a state law that prevents state employees from organizing trips to states that discriminate against LGBTQ people.

Ohio becomes the 18th state affected by the law since it was enacted. Arkansas, Florida, Montana, North Dakota and West Virginia, were added this year as well, joining Alabama, Idaho, Iowa, Kansas, Kentucky, Mississippi, North Carolina, Oklahoma, South Carolina, South Dakota, Tennessee and Texas have all been banned by order of the California Attorney General since 2016.

The law, Assembly Bill 1187, was enacted by the California Legislature in 2016 and signed under then-Gov. Jerry Brown (D) in response to North Carolina’s HB2 “bathroom bill” law that sought to ban people from using the bathroom based on their gender identity.

Since then, California’s Attorney Generals — starting with Xavier Becerra, now the Secretary of the Health and Human Services (HHS) Department in President Joe Biden’s administration — have selected several states that enact anti-LGBTQ laws to face the ban on travel.

Becerra’s confirmation as HHS Secretary was difficult, in part because of his advocacy for LGBTQ rights, such as his use of this policy.

The law in question that Ohio passed is a provision in the state’s budget, passed as House Bill 110. A part of the law grants healthcare providers in the state the right to refuse performing or insuring medical care if they have a “conscience-based objection.” That could allow healthcare workers or health insurers to deny care to people based on their gender and sexuality.

The largely-Republican Ohio legislature passed the bill, and Gov. Mike DeWine (R) signed it into law in July.

“Today Governor DeWine enshrined LGBTQ discrimination into law, threatening the medical well being of more than 380,000 LGBTQ people in Ohio, one of the largest LGBTQ populations anywhere in the country,” then-Human Rights Campaign (HRC) President Alphonso David said in July. “Medical practitioners in Ohio can deny care or coverage for basic, medically-necessary, and potentially life-saving care to LGBTQ people simply because of who they are.”

DeWine has yet to respond to news of California’s ban, the Sacramento Bee reports.

Effective 9/30, CA — in line w/ #AB1887 — is restricting state-funded travel to Ohio as a result of new legislation that threatens to deny medical care to members of the LGBTQ+ community.

Thank you AG Bonta. This discriminatory law has the potential to affect my family on our annual visits to Ohio.

Thank you for standing up for 🏳️‍🌈 rights. https://t.co/JG2tf0F0Ai

Arkansas passed a bill with a similar language and the anti-LGBTQ hate group Alliance Defending Freedom (ADF) was involved in editing the bill.

While California’s ban may restrict a limited amount of travel by state workers, it doesn’t stop the highest-profile and most important trips. The law prohibits “state-funded or state-sponsored” travel, but there are a bunch of carve-outs to the ban, allowing for travel that includes things like auditing, job training, sporting events, or anything that is required to get grant money.

Texas, initially after Gov. Greg Abbott (R) laughed off California’s largely symbolic law, tried to sue California over it. The Supreme Court, the only court with jurisdiction over interstate disputes, dismissed the lawsuit without hearing oral arguments in Texas v. California.

Editor’s Note: This article initially identified Ohio as the 12th state added to California’s state-sponsored travel ban. This article has been updated to accurately reflect that it is the 18th. We regret the error.