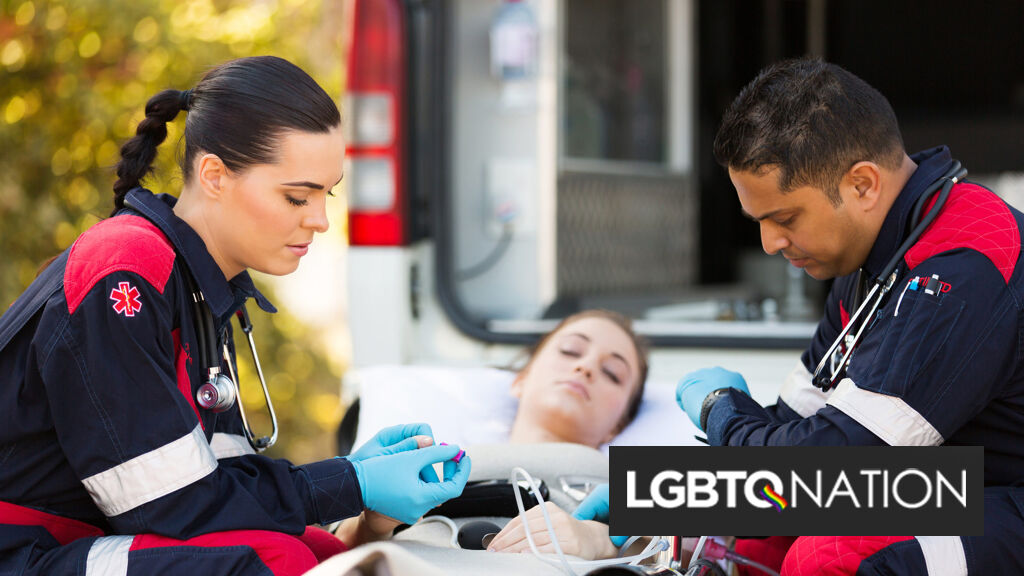 Arkansas Gov. Asa Hutchinson (R) announced on March 25 that he signed into law Senate Bill 289, which is entitled the “Medical Ethics and Diversity Act.”

This means that the state that goes by the nickname “The Land of Opportunity” will grant medical workers the “right” to refuse providing healthcare or assist someone because of the worker’s “religious, moral or ethical” beliefs. That could open the door for LGBTQ people to face denial from life-saving services from doctors, nurses, or EMTs.

Related: Doctors told not to test for STI that affects many gay men so it doesn’t become a super “bug”

In his statement announcing his decision, Hutchinson dismissed concerns that the bill could make it legally permissible to discriminate against LGBTQ people in healthcare. “I weighed this bill very carefully, and it should be noted that I opposed the bill in the 2017 legislative session. The bill was changed to ensure that the exercise of the right of conscience is limited to ‘conscience-based objections to a particular health care service’,” he stated.

He further claimed, “I support this right of conscience so long as emergency care is exempted and conscience objection cannot be used to deny general health service to any class of people.” Yet, the bill as written does not limit the medical worker’s “right” to “conscience objection” in any way. That means someone could claim that they “conscientiously object” to treating a gay or trans person, and the Medical Ethics and Diversity Act doesn’t explicitly exclude such use.

Instead, the act states that the right to refuse granted to medical workers “does not include the right to deny emergency medical care,” at least as defined by state and federal government statutes. The act does not explicitly exclude discrimination as a reason one might refuse to provide a service to a patient.

Hutchinson then ended his statement by concluding, “most importantly, the federal laws that prohibit discrimination on the basis of race, sex, gender, and national origin continue to apply to the delivery of health care services.”

Currently, not all federal laws recognize LGBTQ people in all classes protected from discrimination. The Equality Act would change that, if and when it becomes law. While the Supreme Court decided last year in the Bostock v. Clayton Co. ruling that discrimination against gay and trans people in the workplace was unconstitutional under Title VII, that definition wasn’t automatically extended across all areas covered by anti-discrimination law.

President Joe Biden signed an executive order in January that did extend that definition, directing all executive agencies under the federal government to interpret federal law to include gender identity and sexual orientation in their anti-discrimination policies. However, that can be rescinded at any time in the future and does not automatically extend that interpretation to state law.

That’s why, despite the fact that the White House has stated that bills that discriminate against trans people are illegal in their view of federal legislation, states like Arkansas have still adapted legislation that explicitly bans trans people from sports, healthcare, and other areas of life. Just the day before signing Senate Bill 289, Hutchinson signed a bill into law that bans trans girls and women from sports in schools throughout the state.

That made Arkansas the third this year to ban trans youth from sports. Like many, Arkansas modelled their proposed law behind the sports ban that became law in Idaho in 2020, although a federal court issued an injunction against it.

The bill was delivered to Hutchinson on March 22 after stalling in the Legislature in previous sessions. This time around, it passed a few times, then went through a round of amendments before finally passing both the state House and Senate in its current form.

Arkansas Rep. Brandt Smith (R), who sponsored S.B. 289 in the House, believes that it “provides a solution and a remedy to protect the rights of medical workers,” which he claims they need in order to object from doing certain surgical procedures. He “vetted” the law with the Alliance Defending Freedom, an anti-LGBTQ hate group as designated by the Southern Poverty Law Center (SPLC).

The bill lists protected health care professionals including doctors and nurses and any “individual who furnishes or assists in the provision of a healthcare service” including social workers and pharmacists.

The bill even mentions employers who provide health care as part of their employees’ compensation – even they can ask that employees be denied a specific medical procedure, as long as they claim that their “conscience” requires them to.

“There is no sugarcoating this: this bill is another brazen attempt to make it easier to discriminate against people and deny Arkansans the health care services they need,” Holly Dickson, executive director of the ACLU of Arkansas, said in a statement. She pledges that the group will “be watching and working to ensure no Arkansan is denied life-saving health services because of who they are.”

In their previous statement, Nick Fish of the American Atheists declared that the law “will result in the deaths of Arkansans” in Hutchinson signed it, “and the blood [would] be on his hands.”

“Lawmakers claim this bill is about conscience. Does Governor Hutchinson really want the deaths of Arkansans on his?”

This is immoral. My job is to provide care without judgment, to reduce risk of disease, to move you towards better health- not to deny treatment based upon any personal religious, or “moral” objections. Shame on every legislator who voted for this & @AsaHutchinson for signing it. https://t.co/TgzCJ1Vt4m

Federal EMTALA law says we evaluate and treat all comers for emergency conditions regardless of *anything* about the person.

It’s our mandate, our mission, our morality.

We want to treat all people equally.

Why would anyone want a law that tries to achieve the opposite?!😡 https://t.co/4vghwoVFPk