Another Duggar sibling is facing criminal charges for offenses against children 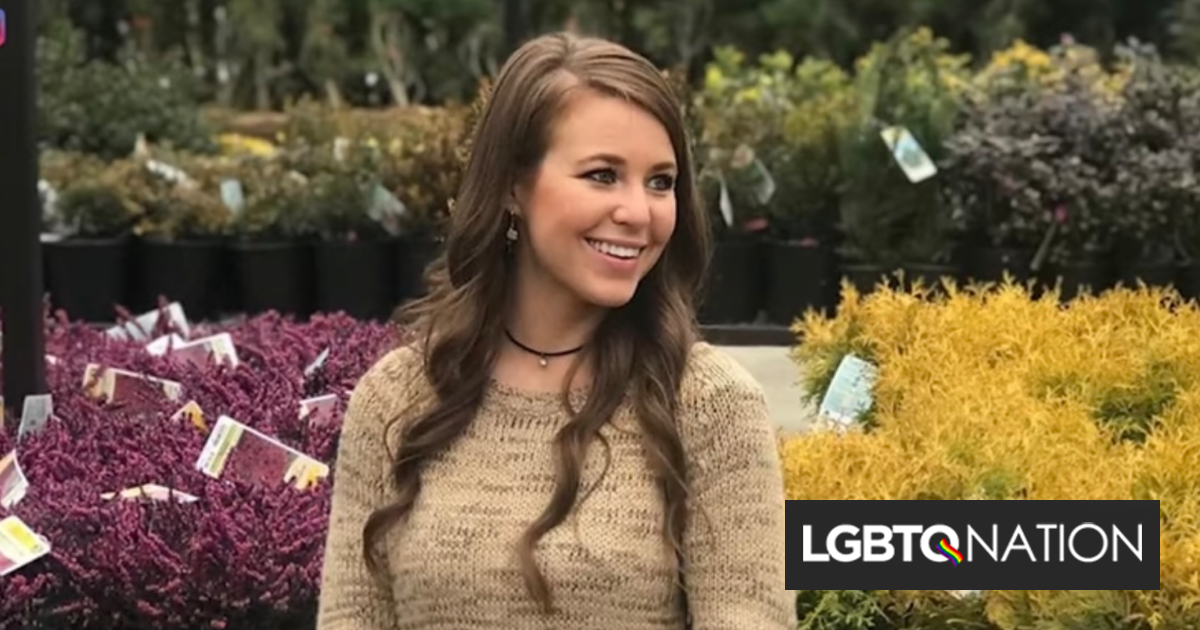 Another member of the Duggar family is accused of committing a crime against children. It was revealed that Jana Duggar, the first daughter in the Duggar family, has been charged with a misdemeanor count of endangering the welfare of a child in the third degree since September. She has pled not guilty and all court proceedings or information stemming from the charges had been sealed until yesterday.

While it is not clear which child Jana is accused of endangering (she does not have children of her own), the revelation came one day after her brother, Josh, was convicted on federal charges of receiving and possessing child pornography. He could be sentenced to up to 20 years in prison on those charges.

Related: 81-year-old gay man spent almost 2 years in prison for having sex in his nursing home

According to NBC News, the offense occurred on September 9, and Jana was arraigned on September 23. Her trial is scheduled to start on January 10 and will be decided by a Arkansas state judge.

Jana’s alleged crime could be anything that stemmed from “conduct creating a substantial risk of serious harm to the physical or mental welfare of a person known by the actor to be a minor,” including “Protracted disfigurement; Protracted impairment of physical or mental health;  or Loss or protracted impairment of the function of any bodily member or organ,” based on Arkansas Code’s Title 5.

Based on the address filed with the court, Jana still lives with Josh and the rest of the Duggar family. She says on Instagram that she is a “Home Remodeler, Gardening Enthusiast, [and] Amateur Cook.”

Jana faces up to 90 days in jail and a $1,000 fine if found guilty. The family has not issued a statement or responded to media requests.

The Duggar family rose to fame on the TLC reality show 19 Kids and Counting, centered on their extreme conservative Christian “Quiverfull” lifestyle. Josh, 33, is the oldest of Jim Bob and Michelle Duggar’s 19 children, and twins Jana and John-David came next.

At the height of the family’s reality show’s success, Josh cashed in on his fame and became the executive director of FRC Action, a PAC run by the SPLC-designated hate group Family Research Council. He appeared at rallies to oppose marriage equality across the country and was a public face for the organization.

In 2013, while working at FRC, he said that his lesbian aunt “chooses” to live a lesbian “lifestyle.” The next year, he said that LGBTQ rights threaten children. His mother, Michelle, then recorded a robocall at the time that said that anti-discrimination measures let “child predators” threaten “the safety and innocence of a child.”

Then, in 2015, accusations that Jim Bob and Michelle helped cover up their son Josh’s alleged sexual abuse of his little sisters came to light. Josh was forced to resign from the anti-LGBTQ hate group FRC Action, and TLC canceled the family’s show soon after, but more revelations came out about how his parents thought Christian counseling was enough to reform him.

The first round of child molestation accusations, though, didn’t stop Josh from using his platform to attack LGBTQ equality.

In 2017, he attacked another underaged girl who had a reality show on TLC: Jazz Jennings.

“What an oxymoron… a ‘reality’ show which follows a non-reality,” Duggar tweeted. “‘Transgender’ is a myth. Gender is not fluid; it’s ordained by God.”

Meanwhile, TLC commissioned a spin-off reality series, Counting On, initially focusing on the older Duggar siblings minus Josh, but eventually including Jim Bob, Michelle and the rest of the family.

Earlier this year, Duggar was arrested by U.S. Marshals in Arkansas, and it later became known that he was facing charges involving child pornography. Duggar pleaded not guilty to the child pornography charges, which Gerald Faulkner of Homeland Security Investigations said were “in the top five of the worst of the worst that I’ve ever had to examine.”

Counting On was cancelled shortly after his arrest.

His trial started on November 30 and Duggar’s lawyers tried to keep the past accusations of child sexual assault made against Duggar out of the trial. The judge rejected that request.

Family friend Bobye Holt, whose daughter dated Duggar when they were 14-years-old, testified that she ended their relationship when she heard that Duggar had molested four girls under the age of 12 in 2003.

Duggar’s father also testified and said that he knew what happened, but said that the girls were asleep when he touched them and insisted that “they didn’t wake up.”

“We tried to handle things in-house,” Jim Bob Duggar testified. “It was a very difficult time in our family’s life.”

Tabloid reports revealed that Jim Bob had reported Josh to a police officer in 2006, who was a family friend (and himself arrested on child pornography charges later) who gave Josh a “stern talk” but did not investigate further. The Duggars allegedly did not alert authorities about previous allegations from 2002 to 2005 either, instead opting for Christian counseling.

Jim Bob is now running for office to become a state senator in Arkansas. Prior to starring on his TLC reality show with his family, he served two terms in the Arkansas House of Representatives from 1999 to 2003.

“Now more than ever, we need a bold voice that is pro-family, pro-business, pro-gun and pro-life,” Duggar proclaimed in his announcement in October.

The Duggars have regularly campaigned for or supported anti-LGBTQ political candidates, such as Ken Cuccinelli and Rick Santorum. Jedidiah Duggar, one of Jim Bob and Michelle’s children and sibling to Josh and Jana, lost a race to become a state representative last year.