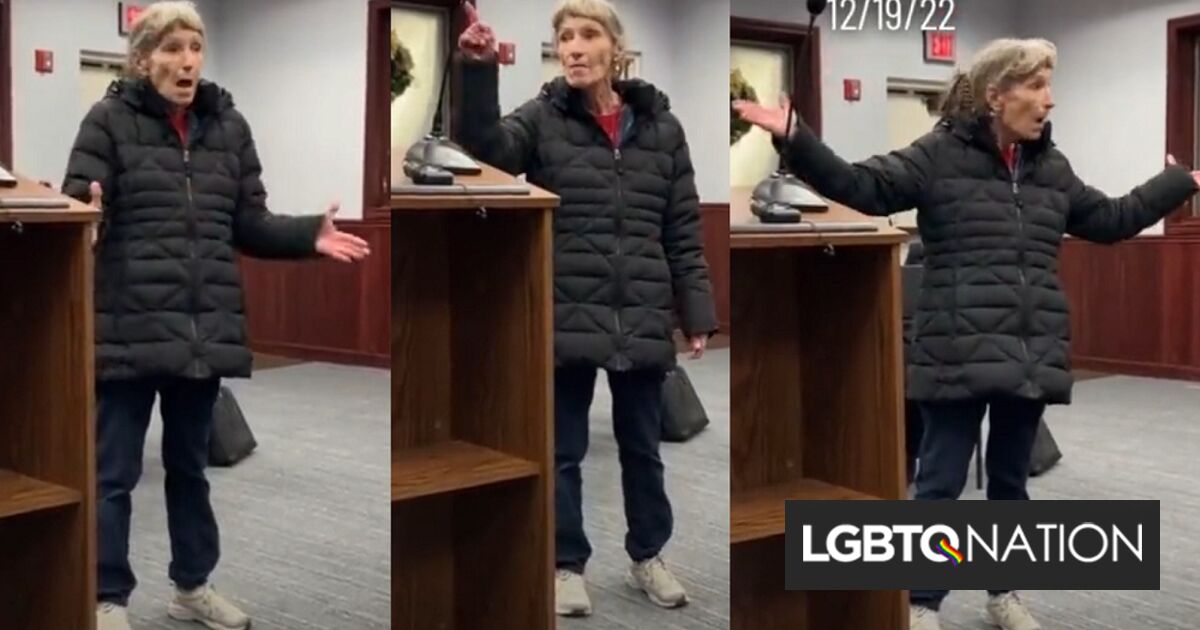 A Michigan librarian who has been under attack by conservative protestors all year reached what she called her “breaking point” at a library board meeting earlier this week, delivering a fiery speech rebuking the Christian conservatives angry about the library’s few LGBTQ+ books.

The woman, who works for the Patmos Library in Jamestown Township, Michigan, explained why the library has been closing early.

The library has been targeted by local conservatives all year for having LGBTQ+ books in its collection, including books like Spinning and Kiss Number 8. Both books have teen girl characters who discuss their feelings for other girls. Library officials said that the library has about 90 books with LGBTQ+ themes in its 67,000-book collection.

The library agreed to keep the most controversial book – asexual and nonbinary author Maia Kobabe’s memoir Gender Queer – behind the main desk so that people would have to ask a librarian to read it, but that wasn’t enough to satisfy the conservatives.

“Pray that we can make changes and make the Patmos Library a safe and neutral place for our children,” said a flyer from one of the local organizations, Jamestown Conservative, this summer.

Two library directors resigned as a result of the hateful messages they received from conservative residents.

The Patmos Library’s funding was on the ballot in the August primary elections, when voters rejected the tax used to pay for the library.

“50% Millage INCREASE to GROOM our kids? Vote NO on Library!” one sign that was directly across the street from the library said, using the regional term “millage” to refer to the property tax.

In November, residents again voted to defund the library.

That’s when one librarian had had enough.

“Why did we close last week? I’ll tell you: We have a breaking point,” the librarian says at the start of a clip that has gone viral. “We have been threatened, we have been cursed.”

She said that she has been working twice as many hours as she normally does because the library can’t hire at the moment, likely due to the lack of stable funding.

She then said that she feels she can’t bring her grandchildren to the town because of the signs that people put up calling librarians “pedophiles.”

“We broke. Deal with it. We’re human. I’m tired and I’m tired of all of you. I moved to this town two and a half years ago and I regretted it every day for the last year. This has been horrible. I didn’t know people could be like this. I wasn’t raised this way.”

“I’m Catholic, I’m Christian, I’m everything you are. But I was taught to love your neighbor as you love yourself,” she said. “That’s not what I hear every day. Not from you!”

“It was one threat too many, one accusation too many. And alls we do is come in here and serve you day after day after day. You’re welcome,” she said as she walked off.

Librarians are sick and tired of MAGA culture wars, and they’re beginning to clap back!

At the meeting, library board president Larry Walton said that the safety threat was real and that the Ottawa County Sheriff’s Office is investigating it.

The library has received donations online as its story gained national attention. Originally, it was going to use its savings and close in September 2024, but at the Monday meeting the board announced that the library could stay open until January 2025 because of the donations.