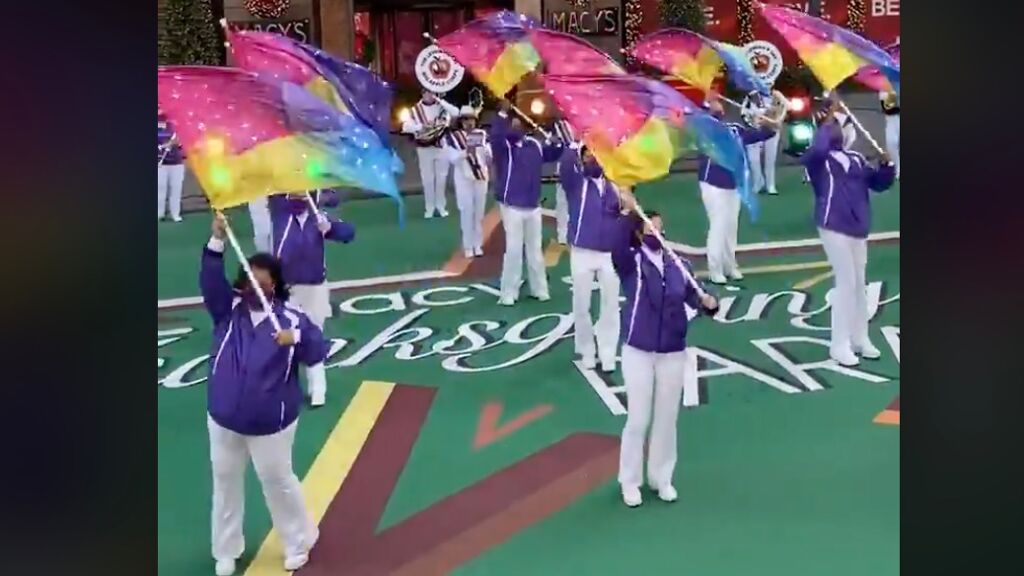 The Lesbian and Gay Big Apple Corps (LGBAC), one of the first all-queer band groups ever in the country, became the first LGBTQ marching band to partake in the Macy’s Thanksgiving Day Parade ever.

Although the event is held in the band’s hometown of New York City, they are only now getting the opportunity, in their 41st year of operations. Artistic Director Marita Begley called this performance “the mountaintop” for them.

“And we applied for a few years. But we were not big enough, we were not strong enough,” Begley said in a band-wide interview with NBC New York.

With COVID-19 however, parade organizers opted to only select local bands this year to lower the risk with putting on the beloved, nationally-televised parade. The number of participants were limited (with reports of by up to 88%) and those selected had to be New York or tri-state area residents.

That gave LGBAC a leg up on the competition, and they were finally selected.

“There are families out there in middle America, throughout the country, that are going to see this and it’s going to give hope to young people who are questioning their sexuality, their gender,” Begley said.

The LGBAC was founded in 1979, proudly “ten years after the Stonewall riots.” According to its biography, it was the first LGBTQ band in New York City, and only the third in the United States.

“We were quiet activists,” Begley said of the band’s early prominence in the 1980s and 1990s. “No one would invite ACT UP to their parade. But small towns were inviting the Lesbian & Gay Big Apple Corps to march in their Fourth of July parade.”

They are now a 501(c)3 non-profit, partially supported by the New York City Department of Cultural Affairs, and sport over 250 members between its marching band and additional symphonic band.

The group was featured in The Atlantic, where their journey leading up to the performance was chronicled by deputy managing editor Rachel Gutman, whose mother plays piccolo in the LGBAC.

With limited options for spaces where they could practice with 80-plus members at the height of COVID, the LGBAC practiced in a parking lot in Newark, New Jersey on weekends, except for their dress rehearsal this week. Some members would travel from as far as Eastern Long Island or Philadelphia, and options for bathrooms were about a half-hour away.

“For six sunny Saturdays in October and November, the members of the Big Apple Corps spaced themselves eight feet apart along the yellow lines of the parking spaces, covered the ends of their instruments with plastic, and played,” Gutman wrote.

Like most participants, the band pre-taped their performance near Herald Square, where the iconic Macy’s flagship store is located, as opposed to actually marching in a procession throughout Manhattan. This was part of an organized effort to limit large crowds amidst alarmingly rising COVID-19 infection rates.

Fittingly, the LGBAC decided to perform “Dancing Queen” by ABBA, a favorite at annual Pride events that they often perform at. The group’s biggest annual outing, the NYC Pride Parade, was cancelled this June.

The band wrote in an Instagram post that they are “[t]hankful… for the perseverance and creativity and vision of our founders, Nancy Corporon and Bob Wolff in 1979… of our magnificent Artistic Director Marita Begley, pushing us since 1982… for every Apple who has ever carried an instrument or flag or banner or water bottle, from 1979 through the future we look forward to, for every parade-goer who has cheered us on in sun and heat and rain and wind, for every tireless advocate for the LGBTQ+ community who has pushed for visibility and representation, [and] for all of you.”

The queer marching band REALLY giving the world what we have craved for decades, a cover of ABBA on a tuba.#MacysParade

I love the #LGBT inclusion at the #MacysThanksgivingParade because it provides visibility for kids being raised in houses where the subject is either never raised or actively demonized.

I genuinely, wholly, unironically adore that New York City has its own big gay marching band. It is perfect.