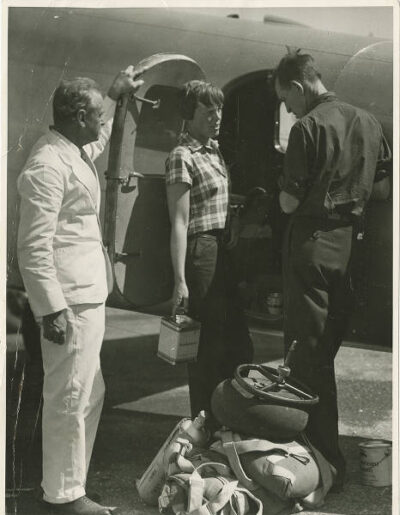 85 years after the trailblazing aviator and feminist disappeared on the final leg of her circumnavigation of the globe, Earhart arrived in the Capitol Rotunda, a seven-foot-tall bronze representation of the best of American ingenuity, grit, and determination.

Earhardt’s likeness, set atop a pedestal of Kansas limestone from her home state, depicts the aviator in a flight jacket with cap and goggles in hand, topped by the flyer’s familiar short bob. She grins knowingly.

The statue’s journey to the U.S. Capitol’s National Statuary Hall, which holds 100 depictions of prominent Americans chosen by the 50 states, began when the Kansas legislature voted in 1999 to replace the state’s two statues on display with ones representing Earhart and President Dwight D. Eisenhower.

Earhart’s is the 11th depiction of a woman in Statuary Hall.

She is “an American who personifies the daring and determined spirit of our nation,” said House Speaker Pelosi (D-CA) of the flyer as she presided over a live-streamed dedication. The ceremony featured Kansas Gov. Laura Kelly (D), out Rep. Sharice Davids (D-KS) and uniformed members of the Kansas Air National Guard’s color guard, women among them.

The aviator’s final flight took off from Lae Airfield in Papua New Guinea in the Pacific on July 2, 1937, the last leg of a journey that would have made Earhart, three weeks shy of her 40th birthday, the first woman to circumnavigate the globe. She was never heard from again.

While Earhart vanished, her legacy as a pioneering feminist and adventurer only grew, as generations of women emulated her example.

Among many accomplishments in her short life, Earhart lobbied President Herbert Hoover for an Equal Rights Amendment (that has yet to be ratified).

She was a pioneer of celebrity endorsements and the face on mass-market campaigns for products from Modernaire luggage and Lucky Strike cigarettes to Beech Nut Gum and the airline that would become TWA.

She was close friends with First Lady Eleanor Roosevelt, with whom she lobbied for women’s rights.

Earhart was a vice president at National Airways.

She created and marketed her own fashion line, sold at Macy’s and department stores coast-to-coast.

And she kept her own name after her marriage to publisher George Putnam, referring to the union as a “partnership” with “dual control.”

She wrote to Putnam on their wedding day: “I want you to understand I shall not hold you to any medieval code of faithfulness to me nor shall I consider myself bound to you similarly.”

She continued, “I may have to keep some place where I can go to be by myself, now and then, for I cannot guarantee to endure at all times the confinement of even an attractive cage.”