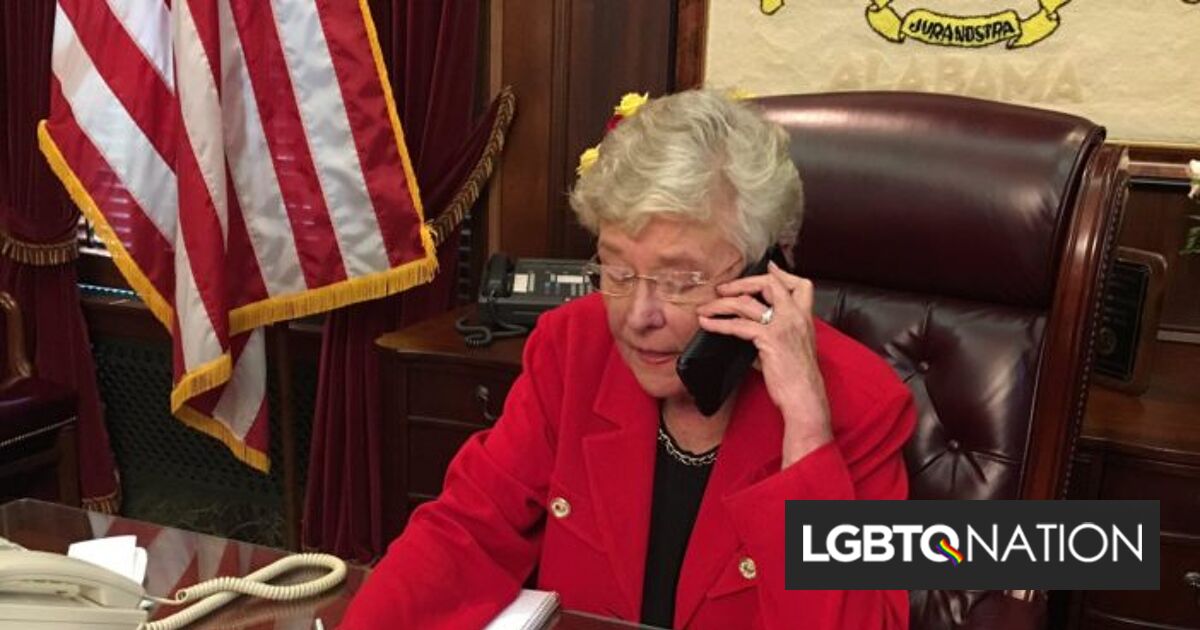 Alabama Gov. Kay Ivey (R) announced on April 23 that she signed into law House Bill 391, which will ban trans people from participating in sports on single-sex teams across all public schools.

Ivey’s signature makes Alabama the fifth state to enact such a ban this calendar year. This is only the second state to ban male and female trans youth from sports, while others only explicitly banned female trans youth. Despite that, the bill’s proponents still claim that its purpose is to protect women’s sports.

Arkansas, South Dakota, Mississippi, and Tennessee also have enacted sports bans on trans people in 2021, joining Idaho’s ban passed and signed by their governor in 2020, which is currently blocked by a federal court’s injunction. Until now, only Tennessee’s applied to trans youth other than trans girls and women. South Dakota’s ban is enacted by executive order, not by legislation.

Gov. Ivey did not issue a statement and her spokesperson offered no comment other than confirming that the bill was being signed.

The law also does not define how “biological sex” will be determined. Mentions of “original birth certificates” were stricken from the bill in an amendment passed before it was sent to the governor.

This is the first ban on trans youth in sports signed since. Kansas Gov. Laura Kelly (D) and North Dakota Gov. Doug Burgum (R) vetoed such proposals in their states, which currently stand. Trans-exclusionary bills failed in Florida and Utah this month as well.

The Republican-controlled Alabama House and Senate voted overwhelmingly in favor of House Bill 391 last week. 33 Republicans in both chambers sponsored the bill.

Nearly all Democrats in both chambers voted against or abstained from voting during the last vote for the bill, except Reps. Adline Clarke (D) and Rod Scott (D), who voted in its favor. Sen. Rodger Smitherman, (D) voted for the bill when it was in committee, but decided against voting for its passage because it “may be a little overkill.”

The bill was passed despite concerns that such a bill would jeopardize the state’s opportunity to land an event with the NCAA in the state. The city of Birmingham is expecting to host the NCAA’s March Madness tourney in 2023, but that may now be in jeopardy.

“We are spending too much time on craziness like this,” said Alabama Senate Minority Leader Bobby Singleton (D), who said the discriminatory nature of the bill will give the state a “black eye.”

The NCAA, which governs college athletics, recently released a statement that it “unequivocally supports the opportunity for transgender student-athletes to compete in college sports. This commitment is grounded in our values of inclusion and fair competition.”

“We will continue to closely monitor these situations to determine whether NCAA championships can be conducted in ways that are welcoming and respectful of all participants,” the statement said, implying that large tournaments will be kept out of states that do not allow some athletes to compete. While Alabama’s bill does not apply to NCAA events, it may still be cause for them to remove future events from the Cotton State.

In a statement, President of the Human Rights Campaign (HRC) Alphonso David said “HB 391 is nothing more than a politically motivated bill designed to discriminate against an already vulnerable population. By signing this legislation, Gov. Ivey is forcefully excluding transgender children.”

HRC’s state director for Alabama, Carmarion D. Harvey-Anderson, called the law “a shameful bill that is built on a web of lies and misinformation. Transgender youth have been playing sports consistent with their gender identity for years without incident on the collegiate and professional level. They just want access to the same childhood experiences as their peers.”

Harvey-Anderson continued, “Ultimately, HB 391 will not just hurt transgender kids. It will hurt all Alabamans because the consequences of this law — economic harm, expensive taxpayer-funded legal battles, and a tarnished reputation — will ripple across the state.”

Lambda Legal senior attorney Sasha Buchert stated, “Transgender people face harassment and abuse in almost all facets of our daily lives. The discrimination we experience is extensive, and that is even without state approval.

“What these state legislators and governors are doing absolutely guarantees that the stigma, harassment, and abuse will get worse, as these elected representatives seem hell-bent on penalizing that most vulnerable population – transgender youth – for being who they are and living as their authentic selves.”

Scott McCoy of the Southern Poverty Law Center (SPLC) Action Fund said in a statement, “We are saddened, but not surprised, that Gov. Kay Ivey continues to prioritize intolerance and exclusion over the needs of Alabama’s transgender students. Despite the transphobic sentiments of the bill, the fact remains that there is no evidence transgender student athletes – specifically females – enjoy any advantage over cisgender competitors.”

McCoy further said that, “by signing House Bill 391, the governor, aligned with the Alabama Legislature, has chosen to leave Alabama’s transgender students behind.”

Across the country, lawmakers have been unable to provide any examples of why a law like this might be necessary – because it isn’t. It’s simply bullying trans kids for political gain.

Sports are for everyone. This bill is wrong.