A principal tries cutting off a student’s graduation speech. He finished it anyway. 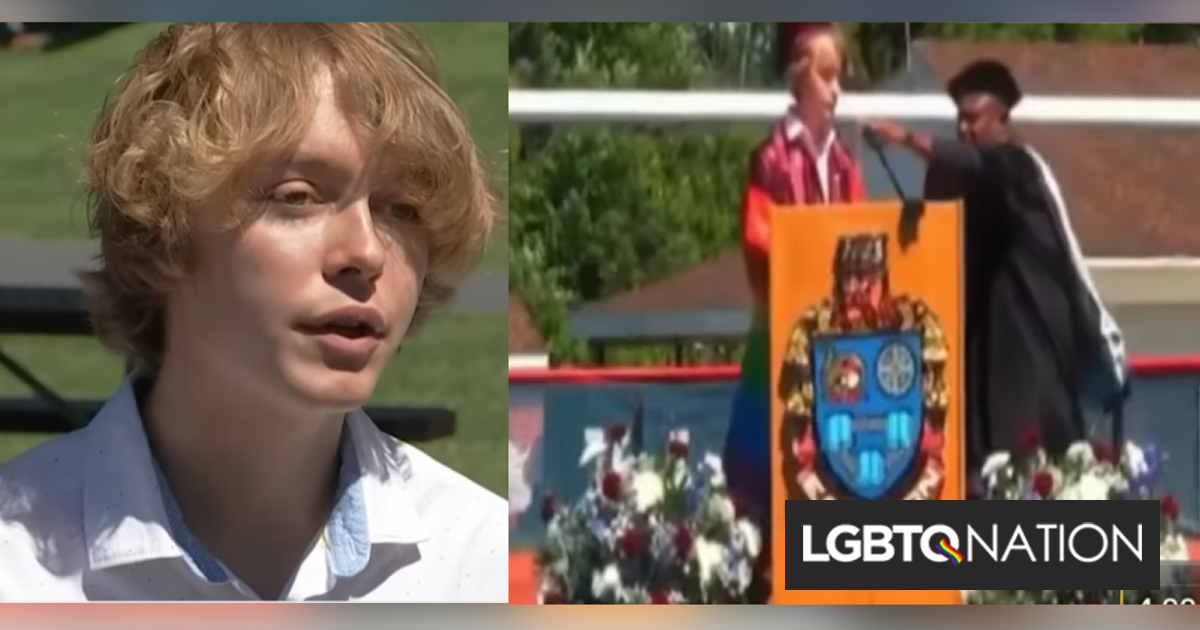 A student and valedictorian speaking at his high school graduation had his speech interrupted by the school’s principal, who refused to let him continue after he began mentioning his coming out story.

“After I came out as queer freshman year, I felt so alone. I didn’t know who to turn to,” Bryce Dershem told the graduation attendants. His principal, Robert M. Tull, then walked behind the podium, and Dershem’s audio suddenly dropped. Tull then walked up to the podium, “grabbed the paper I brought and crumpled it in front of me,” Dershem alleged.

Related: Classmates rally behind trans student as school plans to deadname him at graduation

Tull then reportedly asked for assistance “fixing” the “technical issues” with the mic and audio, but Dershem noted that there were no other issues during the rest of the ceremony.

“Dr. Tull came up to the stage,” Dershem said, crumbled his speech, and then “pointed to the speech he had written for me, effectively, and told me I was to say that and nothing else.”

When Tull returned the mic and he had the opportunity to speak again, though, Dershem said that he recited the rest of his speech from memory, according to NBC 10 Philadelphia.

“As I was saying,” footage showed him saying after.

“Part of our identity, our year, our struggle is 2021. We’re still here though. We adapted to something we never thought possible,” he said.

Dershem received sustained support from the audience who cheered him on as he finished his speech.

“You are not alone in your fight,” he said. “With the belief of those around you, you never have to suffer in silence. If you have struggled or will struggle, I believe you. And I hope you will believe others, too.

“From a formerly suicidal, formerly anorexic queer—the list goes on for me and for all of us—believe me that one person’s belief can save a life.”

After the speech, a teacher who lost their child to suicide hugged him and said “my speech had just meant so much to her, and she really wished [her child] had gotten to hear it, too.”

The school regularly restricts student’s speeches to “shape them,” according to Robert Cloutier, the Eastern Camden County District Superintendent.

“All student speakers are assisted in shaping the speech, and all student speeches — which are agreed upon and approved in advance — are kept in the binder on the podium for the principal to conduct the graduation ceremony,” Cloutier told NBC 10.

Cloutier did not initially address the issue of censorship, but instead chose to share with NBC 10 that the district has provided clinical support for the mental health challenges of students, parents, and staff during the pandemic. It’s unclear whether it was the treatment Dershem received because of his identity, or Dershem’s experiences in school, were one of the “challenges” the district was attempting to respond to.

In the weeks before speaking, Dershem’s mentions of his identity were removed from his speech by Eastern Regional administrators. Two days before the speech, Tull allegedly told the school’s valedictorian, “my graduation speech was not my therapy session.”

“They didn’t want me to say that I was queer, because they said it would exclude people in the audience.”

“I did feel censored,” he said. “I felt as though they were trying to regulate the message I was going to say and take away the parts of my identity that I’m really proud of.”

Dershem decided to memorize his original speech and prepare to deliver it off-hand in case he could no longer read it. That’s what he did.

School administrators also objected to Dershem’s outfit. They wanted him to remove a Pride flag he attached to his graduation gown, but he refused.

His graduation cap was decorated in Pride colors anyway, complete with a power fist designed with the colors of the transgender flag and the Philly Pride flag.

Cloutier would later deny that any school employees asked Dershem or any student to “remove their personal identity from any speech.” He did not immediately respond to allegations that administrators may have tried to remove Pride symbols from his attire.

Dershem’s entire speech is available to watch on YouTube as well. It has garnered more than 60,000 views.