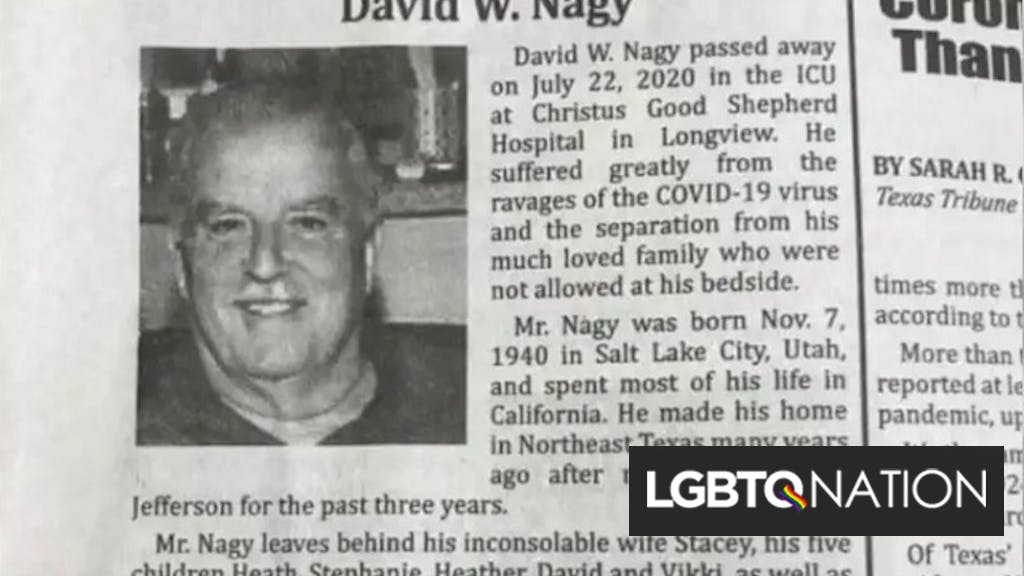 About 160,000 people have been confirmed to have died from the coronavirus pandemic in the U.S. and his wife’s anger at Republicans for mishandling it has caught people’s attention.

David W. Nagy of the small town of Jefferson, Texas passed away on July 22 from the COVID-19 virus. His widow wrote a scathing obituary in the local paper that has gone viral.

Related: Texas woman claimed COVID-19 is a media hoax & can be stopped by “faith.” Days later she died.

Stacey Nagy, who described herself as “inconsolable” in the obituary that was published in the Jefferson Jimplecute, wrote that her husband “suffered greatly from the ravages of the COVID-19 virus and the separation from his much loved family who were not allowed at his bedside.”

She didn’t hold anything back in the obituary:

Family members believe David’s death was needless. They blame his death and the deaths of all the other innocent people on [Donald] Trump, [Republican Texas Gov. Greg] Abbott and all the other politicians who did not take this pandemic seriously and were more concerned with their popularity and votes than lives.

Also to blame are the many ignorant, self centered and selfish people who refused to follow the advice of the medical professionals, believing their “right” not to wear a mask was more important than killing innocent people.

A statement issued by the family declared that Dave did everything he was supposed to do, but you did not. Shame on all of you, and may Karma find you all!

Stacey Nagy was interviewed by CNN after the obituary she wrote got attention online. She said her husband “was a fun-loving person and he loved his family dearly.”

“It’s frustrating when you know that somebody’s died that didn’t need to die, or at least they didn’t need to die in the way they did and the time that they did,” she said, adding that she wanted to “put blame where blame belongs” and show her neighbors why they should be wearing masks.