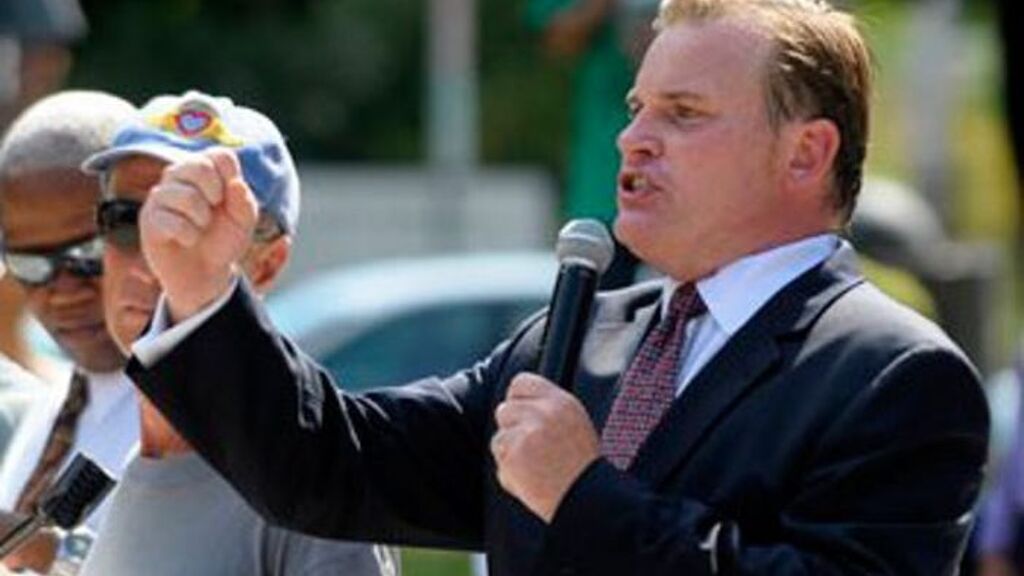 Brian S. Brown, the President and co-founder of the National Organization for Marriage (NOM), is laying out his plan – or lack thereof – to lead the way to overturning Obergefell v. Hodges, the Supreme Court ruling that granted marriage equality across the country five years ago.

In an email to supporters, Brown writes that “NOM believe there is now a strong majority on the Court to overturn Obergefell if the right case is brought before it. We are determined to do just that.” He then immediately asks for readers’ help, in the form of financial support.

Brown knows that he, nor his organization, can’t just outright challenge the ruling. In fact, he says as much: “The strategy behind trying to bring a case before the US Supreme Court to overturn the Obergefell gay ‘marriage’ ruling is complex,” he admits.

“We can’t simply file a lawsuit and ask the Court to take it up.”

Still, he believes – in part due to Amy Coney Barrett’s ascension to the high Court – that it is still possible, as long as they have “the right case.”

Brown’s scheme, as he explains it to readers, is to first “present a real and present controversy that requires a judicial ruling to resolve.”

Essentially, someone within governance or regulating the licensing of marriages would have to concoct a reason to deny a same-sex couple from receiving a marriage license that would make it beyond the desk of a local magistrate. Brown suggests actions such as “a state law passed by a supportive Legislature, an executive order or regulation issued by a supportive Governor, or possibly even a law enacted directly by voters” as potential starters.

NOM, designated a hate group by the Southern Poverty Law Center (SPLC) in 2010, hopes to craft “a great deal of thought and coordination with allies and policymakers in several key states” for that to happen. “Our team is working hard to evaluate all the options,” Brown adds.

Brown also writes that such effort would be contingent on “the judicial territory where the controversy arises” to determine if there is any kind of way to build “the path it would take to get before the Supreme Court” – but, as Brown himself admits, the Obergefell v. Hodges ruling is a legally binding precedent. That means lower courts aren’t to rule against it, and if they do, an appeal would lead to its reversal.

“We know that we will likely lose in the lower courts,” Brown writes. Still, he believes with the proper funds that NOM can find “a situation where an official party who has standing to appeal will be able to press the case forward” all the way through local, state, federal, and appellate circuits to the Supreme Court.

Brown nor NOM would be in position to ask for a reversal of marriage equality, even in this scenario, although they could file in support of such an effort.

Still, the only reason why Brown – or anyone – believes they can bring an end to marriage equality is because Justices Samuel Alito and Clarence Thomas have overtly expressed their desire to reverse Obergefell if they were to be presented the opportunity.

Just earlier this month, Justice Alito said in a virtual keynote address that Obergefell is detrimental to freedom of speech and he still supports those that “cling to traditional views on marriage.”

“We now have two Supreme Court Justices, —Samuel Alito and Clarence Thomas— who are openly questioning the wisdom of the Court’s anti-constitutional ruling in Obergefell and seemingly inviting a challenge to it,” Brown wrote. He has previously shared photo ops with Alito and Justice Brett Kavanaugh.

While Amy Coney Barrett claims to respect same-sex marriage, she spent the prior five years expressing her explicit disdain for the ruling. During her confirmation hearings, Barrett refused to say whether she would consider reversing Obergefell: “I’m not going to … give a thumbs up or thumbs down to any particular precedent,” she told Sen. Patrick Leahy (D-VT).

After Barrett’s nomination, Brown wrote in an email to supporters that she was “the perfect pick” and her confirmation would mean the “special rules for homosexuals and the so-called transgendered… will no longer see the light of day.”

Brown also claimed her nomination as a sort of vindication for NOM, saying they “were mocked and ridiculed by LGBT activists for even suggesting that the Supreme Court would ever reverse their ruling imposing gay ‘marriage’… they don’t think we’re crazy any longer.”

With three other conservative-leaning justices, it would be plausible for the court to rule in favor of vacating the precedent set by Obergefell – if they were presented the opportunity. NOM does not describe a way they can make that opportunity happen.

NOM also claims that “of course, we also need to consider the political and public opinion environment in which this sort of case will be debated,” despite the fact that most Americans, across nearly every demographic, have favored marriage equality for years, including in polling right before the election.

Still, NOM tells supporters that providing “financial resources that can be devoted to supporting the effort” is most crucial to putting their “plan” into effect.

“We have a lot of work to do, and we urgently need your help to be successful,” Brown concludes.