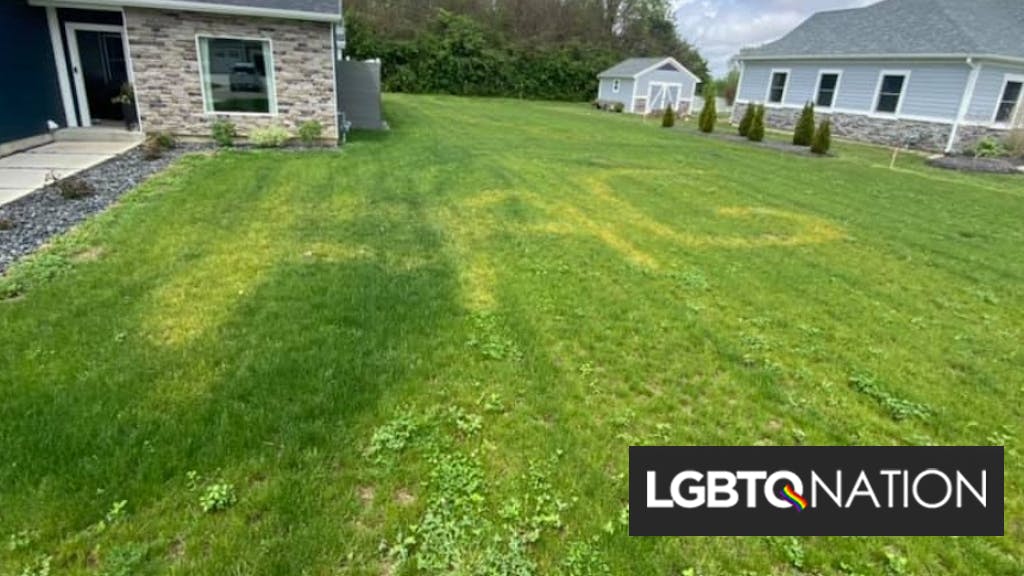 An Ohio gay couple found a hateful slur burned into their lawn, but they’re trying to turn it into an opportunity for their local community to rally for LGBTQ equality.

Mike Stone said that he went outside to give his fiance Bradley O’Dell something he forgot on May 22, when he saw something on the lawn in front of their house in the small western Ohio town of Arcanum.

Related: A church responds with love to anti-gay vandalism

Someone had used chemicals to burn the word “F*G” on the couple’s lawn.

“But, as a gay man, I feel like I’ve gone through this before. It’s almost like it comes with the territory.”

“This act of barbarity and hate will not be given the power to define us,” he wrote. “This person’s small minded, ignorance will not be allowed to bring negativity into our lives. We stand strong together, with the love and support of our family, friends, and community with pride and compassion.”

Ok…so all anger aside, which I can’t even begin to express, all I can say is seriously? I found our yard like this…

O’Dell and Stone filed a police report and installed security cameras. But they didn’t lose their faith in the community.

“I grew up in this town,” O’Dell said. “I moved back for a reason and that’s because I know this community as a whole is great.”

The couple turned the act of hate into a fundraising opportunity for a local LGBTQ organization, Have a Gay Day.

“If you’re struggling with who you are, regardless of how you identify yourself, there are people out there that will support you,” O’Dell said. “And there are people there to help you through those tough times, you don’t have to do it alone.”

“We can turn this terrible act of hate into something good for a local organization,” he added.

In the five days since they started the fundraiser, they have raised almost $4800 of their $5000 goal.

Arcanum Police Chief Marcus Ballinger said that the investigation is still on-going, and no charges have been filed yet.