A DC gay bar apologized after security dragged a Black woman down stairs. That’s not enough. 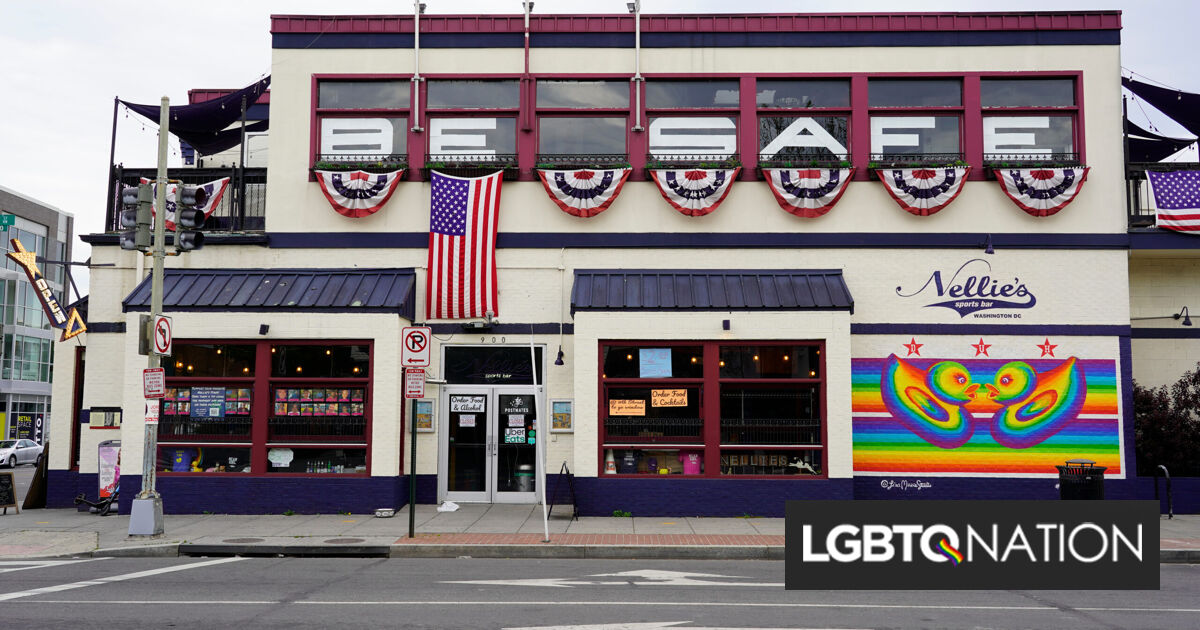 It’s coming up on a week since video went viral of a Black woman being dragged and forcibly thrown out by security at a popular LGBTQ bar in Washington, D.C.

While the bar — Nellie’s Sports Bar in Shaw, within the district’s northwest section — has since issued an apology and fired the security team responsible, this is the latest instance of what locals claim is an anti-Black culture fostered at the bar.

Nellie’s was crowded on Saturday, June 12, during D.C.’s Pride festivities right as most COVID-19 restrictions were lifted in the city. A video was posted online from that night, which appeared to show a woman being dragged down a flight of stairs by a security guard at one of the most popular bars in the city.

Several people grab the security guard to pull him away from the woman, and she is later seen on the floor. Punches are thrown as the situation becomes chaotic, and someone appears to punch a Nellie’s employee who is not a security guard.

Towards the end, other security guards are pushing people out the door. Security continues to push until the woman and others are outside the front door.

An initial protest formed outside Nellie’s at around 6:30 p.m. on Sunday. Keisha Young, 22, identified herself as the woman in the video.

She said that she was sore from the attack but has not suffered major injuries, but she wants the bar to be held accountable for the violence.

Young is not alone in wanting Nellie’s to cease existing. Preston Mitchum, an attorney and activist that is co-chair for the board of the Collective Action for Safe Spaces (CASS), also believes that it’s time for Nellie’s to be replaced in the community.

“Since 2017 — at least — there has been a consistent erasure of Black queer patrons at Nellie’s,” Mitchum said to LGBTQ Nation. “When violence ensues, and that is often, the staff at Nellie’s has treated Black patrons differently than non-Black patrons.”

Even when violence isn’t happening, Mitchum has found that “anti-Black racism is clearly prevalent” at Nellie’s. “I noticed through a lot of observations that when it was white gay men fighting each other or white men harassing Black men, the response is different,” he said.

He has tried for years to bring Nellie’s to the table over their issues with alleged discrimination and anti-Black treatment. He has personally spoken to the bar’s owner, Douglas Schantz, in the past.

“Doug does not want to be held accountable,” Mitchum said. “The only answer for them was to close.”

And just so there’s more context about Nellies Sports Bar, here is a letter I wrote AFTER meeting with Nellies’ owner, Doug Schantz, about the pervasive anti-Black racism. This was FOUR years ago. #nopride4nellies pic.twitter.com/FTIj4kZR7w

After news of this weekend’s incident came to him, Mitchum sprung into action to support protests. He wants to make sure there’s not “more band-aids covering an overarching wound” caused by Nellie’s treatment of patrons.

Makia Green, the co-conductor of Harriet’s Wildest Dream, an abolitionist “defense hub” has led the rapid response to the incident. They confirmed to LGBTQ Nation that Young has not gotten all of her belongings back nor has she received an apology.

“Her mother was connected to our organization asking for help because we do rapid response support when it comes to violence against Black girls and families,” they said, “so we connected with Keisha and just tried to make sure she went to the doctor that she was OK.”

Green and their co-conductor went to Nellie’s, asking for Young’s belongings and for Schantz to come and personally apologize to her. They only returned some of the personal items Young recounted losing during the saga, including “her glasses, her shoes, her phone.”

Then, regarding an apology from Schantz, “The manager called him and he declined,” they said.

That led Harriet’s Wildest Dream to organize protests and call for a complete boycott of Nellie’s. Tonight starting at 7:00 pm, they are leading a “block party” protest at Nellie’s along with speakers or support from the non-profit HIPS, the Palm Collective, DC Ward Mutual Aid, local DJs and street vendors.

“People that serve the community are co-sponsors,” they said. “It’s actually everyone’s responsibility on this Juneteenth and Pride season to support this boycott, support Keisha and support Harriet’s Wildest Dreams.”

“Just as one can defend one’s self, the law allows one to defend others that are in imminent danger of bodily harm. Multiple security guards and other staff of Nellie’s Sports Bar were pummeling Keisha Young’s cousin, Dayon Kidd, at the top of the staircase… #boycottnellies pic.twitter.com/criX5XjY9U

The actions of Nellie’s staff were not justified. Any ambiguity concerning what happened that night can be dispelled by Nellie’s releasing the video surveillance.”

Green and their fellow organizers are calling for four demands, the first one being that Nellie’s release the full surveillance tape. “Anyone who has questions about what happened should be calling for that,” Green said.

They’re also calling for Nellie’s to continue paying Black staff throughout the boycott, management and ownership to attend community-led listening sessions, and reparations for Young and “all of the survivors that are actually joining us tonight to speak out about the violence they’ve experienced at Nellie’s and the discrimination they’ve experienced.”

“We were incredibly upset and disturbed to see the unfortunate event that took place at Nellie’s last night,” the bar said first on Instagram. “We are undergoing a full investigation of the situation. At Nellie’s we foster an inclusive and safe environment, so events like this are completely unacceptable to us.”

Nellie’s announced they were closing for a week after the incident happened, apologizing “to all who witnessed the horrific events,” but not to Young. They noted that they are paying non-security staff their normal wages throughout, and later shared that they had fired the vendor they employed to provide security staff at the bar.

“The public didn’t really get dragged down the stairs. I did. The public doesn’t have bruises. I do,” Young said to DCist.

Mitchum stressed that simply closing and not answering to the community, that if they were truly apologetic, they would at least apologize to the patron they mistreated. “[Young] has not gotten her stuff and they have not apologized to her yet, to the actual person who they directly harmed,” Mitchum told LGBTQ Nation.

“This has happened repeatedly. People are missing that.” Mitchum said, “there are moments here that are clear that Nellie’s will not change.”

Nellie’s drew attention in 2018 when the bar flew the “thin blue line” flag. They said they intended to honor police officers who were killed in the line of duty and later apologized for flying the flag that is associated with police brutality against people of color.

“We messed up,” the bar said in a social media post at the time.

Mitchum said that itself was the last straw for many people. “It is not acceptable for queer bars to treat us like we’re the outsiders,” he stressed.

Green echoed Mitchum in calling out the bar’s persistent record of “mess ups.”

“It is a known thing to black and brown people that Nellie’s is not the safe place,” they said, noting the same “thin blue line” flag incident, but also their record of underpaying Black staff and DJs to play at the venue, the bar’s “clear discriminatory practices when deescalating conflict,” and, according to Green, their ban on hip-hop music “as a means to decrease the violence.

“Which, was obviously a microaggression — really, macro to many of us — connecting blackness and black culture to violence. So it’s very apparent that they, the owner and the environment in their lives is hostile and aggressive towards black people,” Green said.

Mitchum was clear that this was “an overarching issue about how queer bars treat Black patrons” in the Capital region. But, he notes, “A few years ago when we called out those other bars [such as Number Nine, JR’s Bar and Grill, and Pitchers], they listened… the same can’t be said for Nellie’s.”

Today, Mitchum doesn’t believe they can be redeemed. “Truth of the matter is, Nellie’s is not a queer-friendly bar,” he remarked.

The problem is: people treat anti-Blackness at Nellie’s Sports Bar as an one time event as opposed to the compounded events that have occurred over the years. So, no, it doesn’t surprise me that some people finally started talking about the “new video” but never the first.

Not only is he asking D.C. residents not to return to Nellie’s, he’s calling for a full boycott, using the hashtag #NoPride4Nellies online. He’s organizing a list of other businesses that will take a stand and declare their space actually safe for Black and LGBTQ people.

He also promised to contact city councilmembers if there is not action taken.

NEXT: Many of us will be sending emails to D.C. City Councilmembers with demands/questions to look into Saturday’s incident at Nellie’s in addition to past acts of anti-Blackness.

For Young, her attorney has announced that she intends to press for charges against Nellie’s and their security.

“She does want justice,” attorney Brandon Burrell said to WUSA9. “So we’re going to at least do our part to file the report and see what the prosecutors make of that.”

As of publication, Young’s GoFundMe has raised nearly $16,000 for her legal fees, therapy and medical recovery.

“She went through a really traumatic experience by being dragged down the stairs by someone twice her size,” Green told LGBTQ Nation, “and so I would say she is resilient and she’s handling it the best that she can.” Green noted after attending the initial protest the day after, she became understandably “overwhelmed and sick.” Green did not speak for Young, but gave the sense that despite the support, the incident is still weighing on her.

Focusing on Nellie’s, both Mitchum and Green want Nellie’s to close — for good.

Mitchum will support those who “Continue to organize, continue to protest, use social media and hold spaces” advocating for Black and LGBTQ people. Mitchum is also calling for other people to support them as many claimed they would last year, especially other Black queer people.

“For Black queer men that will continue to go, and believe that their fun is more important,” he said, “all I can do is feel bad that you can see this and not be moved to act. I feel so bad that you don’t care about Black women that much.

“Black queer people must stand up for each other,” he stressed.

If you want to go to your beloved bar, just go and stop with the intellectual dishonesty. But I suppose you’ll have to wait until next week since we got it shut down this one.

Green implored something similar. “What happens to one of us happens to all of us,” they said.

They added that Nellie’s can either “bend to our demands or rely on their relationship with the police” to survive the boycott. Green added, “I think the rest of the community nationwide will see truly where the people are and where Nellie’s stands.”

Nellie’s has not respond to LGBTQ Nation‘s request for comment, and this story will be updated if and when they do.